Hi there! The inspiring group effort (solving that 500-chassis with low 48v power) that I witnessed in this board recently, made it seem like I could easily get the help I need for my busted TRS Jack. I just need help identifying which part to order.

I have a Hafler Pro2400 power amp that has the separate XLR / TRS input jacks. Turns out that the circuit board that has the mounted TRS jacks/XLR ins is pretty-much held in place by the hex nut rings that snug the TRS input jacks to the chassis. And these TRS inputs had plastic threaded shafts. So, I noticed a lot of play in the jack (and I'd been having some signal drops on this amp) so I tightened the nut on the TRS thread... low & behold, I overtightened it, and sheered the outer-most threads of the TRS input jack. Now I can't secure the nut (shut up, VVV!) / which leaves the circuit board kinda floppy.

I have the manual, and the manual has a parts list / schematic... but I really just need to know what modern equivalent part is gonna surface mount exactly in place where this older TRS jack is. The parts list calls it: "PC Mount Phone Jack, CCH-208" (as shown below) 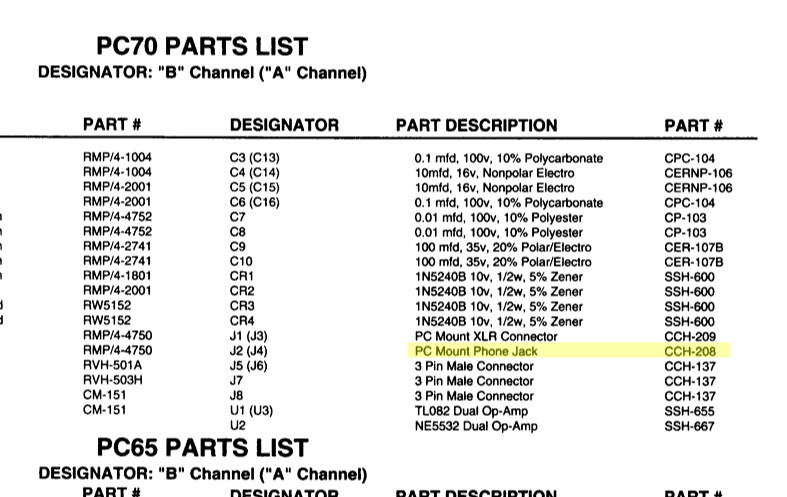 Here's a photo of the part — it's the black & silver "box" right above the DH1 designation on the PCB. 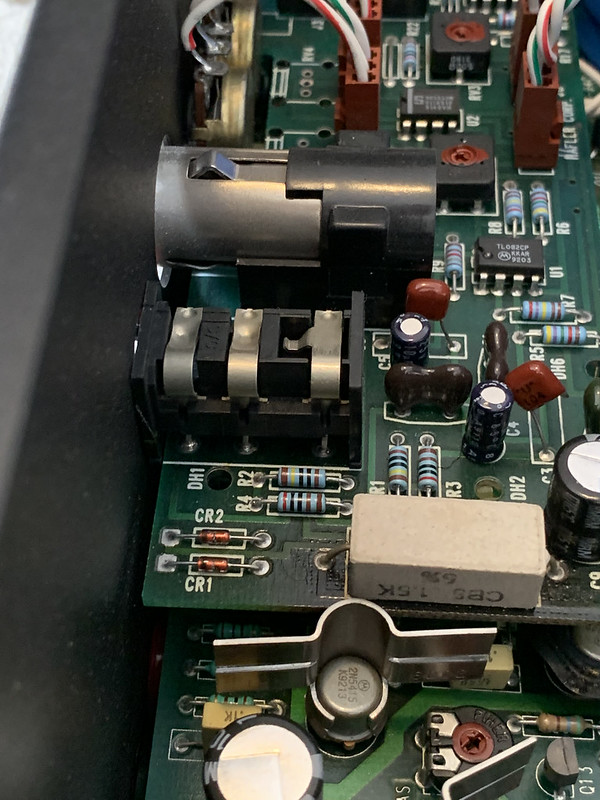 I'm handy with a soldering iron, and I'm confident I can cleanly desolder / re-solder... but I definitely don't want to buy the wrong part. It doesn't seem like CCH-208 means anything to Mouser / McMaster Carr / Digikey... so I suppose this is the "Hafler part #", and since these are legacy, I don't imagine I'm gonna get much love calling them up to ask (especially because their website says clearly: "we cannot offer support on legacy units...")

So if anyone can help me figure out how to locate the best search terms to use, so that I can find the most appropriate current part, I'd really appreciate it.
ADSR | twitter | linkedin | Instagram | my band | BandCamp
Top

I can’t imagine it being something nonstandard, but If you desolder and remove the existing Jack you can determine the pin out to make sure you buy the right thing.
Top

I think this is what you need:

or even lower profile:

All of the modern style jacks I know have the legs spaced equally (Cliff/Rean/Neutrik/Amphenol). The tip on that one is spaced inwards a bit more.

It might be easier to rotate a modern jack 180 degrees, legs pointing up, and run some jumper wires to the PCB. Or a vertical mount Switchcraft 112, legs pointing into the chassis.

What was the threaded part on the old jack made of? Plastic or metal? Likewise, the nut? Was it a plastic bushing & metal nut?

Is there a legible logo embossed in the plastic?
"What fer?"
"Cat fur, to make kitten britches."
Top

The Scum wrote: ↑
Tue Feb 23, 2021 6:12 pm
It might be easier to rotate a modern jack 180 degrees, legs pointing up, and run some jumper wires to the PCB. Or a vertical mount Switchcraft 112, legs pointing into the chassis.

What was the threaded part on the old jack made of? Plastic or metal? Likewise, the nut? Was it a plastic bushing & metal nut?

Is there a legible logo embossed in the plastic?

I don’t think jumpering it to the PCB is gonna fly, as I was mentioning; the pcb is supported by the thread poking through the chassis, and it’s snugged in place by the metal washer & metal nut, on the plastic threading.

That’s why I’m so intent on trying to find a proper-fitting part.

My primary reason for this thread was to see if I could be super certain that I was ordering a like part (that would pin into the PCB properly and would stand-off to the right height as to escape the chassis at the right height) so that way I could de-solder the old and solder-in the new all in one stroke... but I suppose the wise /frugal choice is to remove the part and get a better look before ordering a replacement part.

you might be able to bend the leads on one of the Rean/Neutrik jacks to make it fit too. it's not offset too far, but it wouldn't be a perfect fit either.
Mike
www.studiodrumtracks.com -- Drum tracks starting at $50!
www.doubledogrecording.com
Top

Or, if the legs of the replacement TRS jack don't quite match the holes on the PCB (chances are 4 of 6 will fit) and the legs cant be bent to fit, just drill a couple of holes in the right place and then bridge over to the pads on the underside with a bit of solder. If the nut is being used to help secure the PCB, make sure the height of the new jack is right.
Jim Legere
Halifax, NS
Canada
Top

Okay — So, it definitely looks like an obscure, (maybe even custom-designed?), part... Though you can't 100% tell, after my somewhat brute force extraction (no PCBs were harmed in the yanking of this part)... Also, no discernible model# or uniquely identifying markings on the part. It does say "Mexico" on the back, though.

There's (supposed to be) two PCB plastic spring clips that grip it into the board, and it's got these little springy feet. 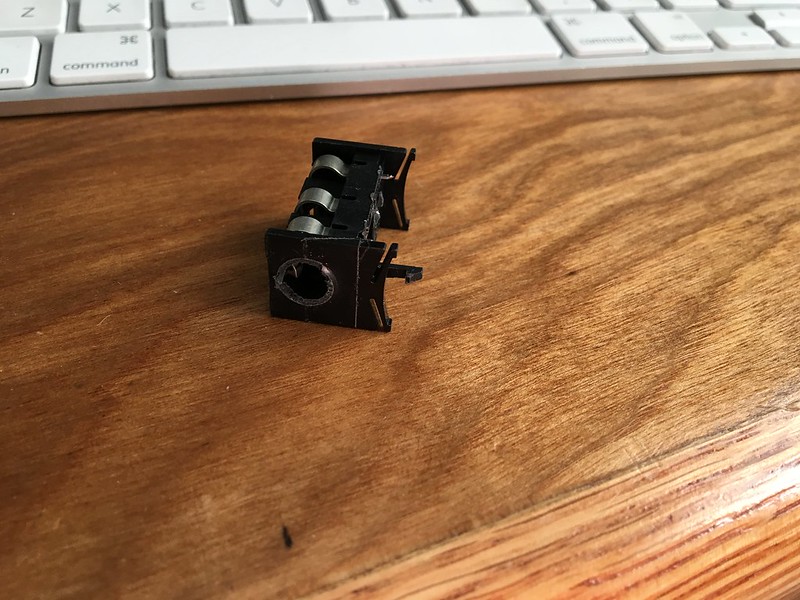 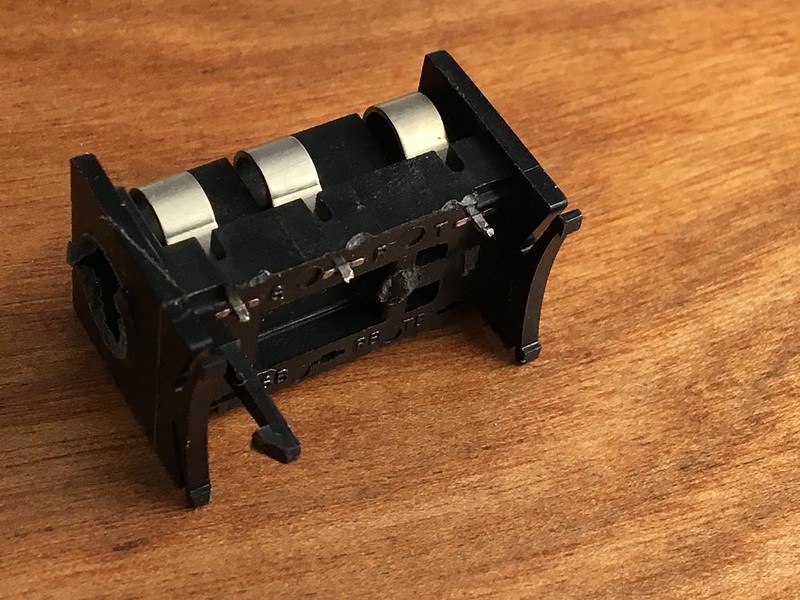 And from the below pic, you can see how high the jack sits off of the PCB. Also, strange; the springy foot doesn't actually rest on the PCB at all, on the front (and there's no ledge that it rests on where this PCB meets the chassis). 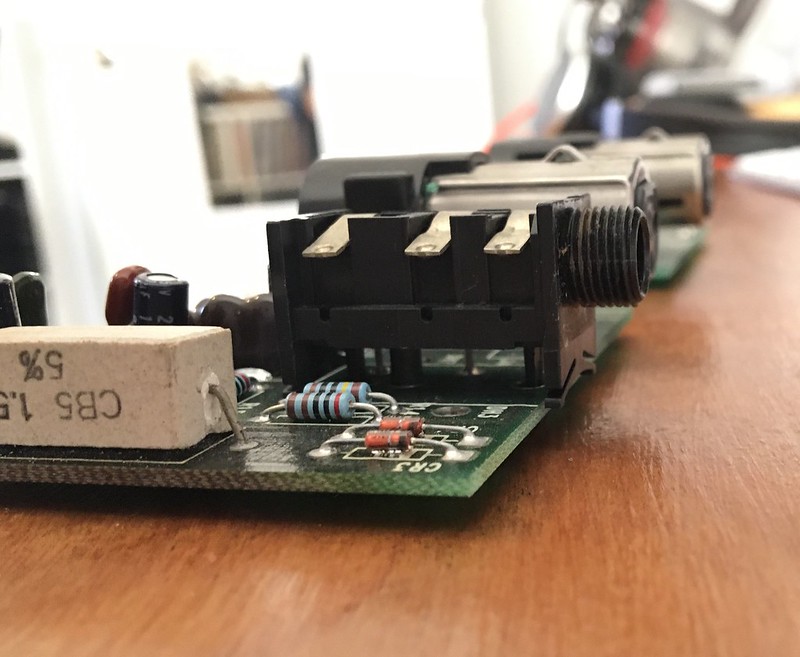 Also — an update on the PCB mounting. I THOUGHT that the TRS threading was the ONLY support that was holding the PCB in place, but it turns out there are 4 small plastic stand-off supports that rise up from the larger circuit board below, and this PCB is resting on those... trouble-is... 3 of them are non-existent. I can see that they've broken off in the past. So I'm wondering exactly how I might find another way to replace those and secure the board to the other board via those stand-offs... if I successfully did that, then I could use ANY TRS jack and just jumper it to the PCB.

I just pulled out the one remaining nylon stand-off, if I can find more of these, I should be in good shape 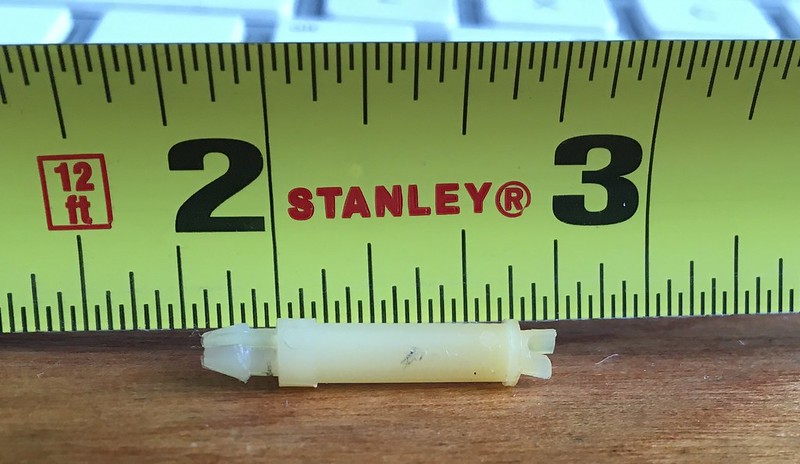 Regardless of whether or not I find a suitable TRS jack, I should have these in there for added support.
ADSR | twitter | linkedin | Instagram | my band | BandCamp
Top

Is it just me, or is there an S/C embossed in the top of the jack?

Oh damn! There is. I had seen that, but didn’t think that it was a brand indicator. On the bottom, I saw lettering that really just indicates; tip, ring, and sleeve in two-character designations... so I sorta glossed over this letter pairing. Thanks!!

Looking at the website you’ve linked to… This is definitely a switchcraft unit, And it seems to be from this series that you’ve linked to. I think I’m gonna be all set once I have time to look over the different models on that page.
ADSR | twitter | linkedin | Instagram | my band | BandCamp
Top

"Mexico" was the giveaway. Pretty sure the Lichtensteinian company never moved their production there, but Switchcraft did.

Not sure I've never seen one with the little risers like that one has, though.

The "12" version is probably the one you want. Seeing the other jack from the other side shows it's missing the metal pins on the other side altogether.
"What fer?"
"Cat fur, to make kitten britches."
Top

Amazon guy will be by in the morning to deliver the Internets you won today.

Can we play it again next week?
"What fer?"
"Cat fur, to make kitten britches."
Top

Users browsing this forum: No registered users and 46 guests