I'm working on a new space in a barn and I'd like some advice and experiences from anyone that might have something to offer.

Here are some photos of the space that I'm dealing with:
https://drive.google.com/drive/folders/ ... sp=sharing

It the upper level of a mid-size barn. My basic plan is to float a floor on top of the existing floor, insulate the outer walls, air gap, more insulation, sheetrock then decorative wood (for a "barn" look instead of sheetrock) on all outside walls. There will not be rooms upstairs, but an open space. I will build some speaker isolation closets downstairs and MAAAAAAYBE a vocal booth, but for the main plan, it will be all open. I also need to put in a wider staircase with a secure access door.

I will need a lot of advice as to how to go about this the right way, as I've never done this from scratch.

My first concern is how to handle the front hayloft doors. I would like to still have access to them in case I have to pull any heavy/awkward gear upstairs, as well as to be able to open it up on nice days for ventilation. I will somehow need to have some sort of sliding wall or similar situation to block off the doors most of the time, insulation and soundproofing wise. I'm not sure how best to do that yet.

I also need to figure out the best way to handle heating and air conditioning. It needs to be a year-round studio so it needs to be comfortable, within reason. I worked at a barn studio for many years and had to endure sub-freezing winters and sweltering summers with little relief so I want to find the best way to deal with this. Any ideas?

This will be a major work in progress and I will update as I move along. 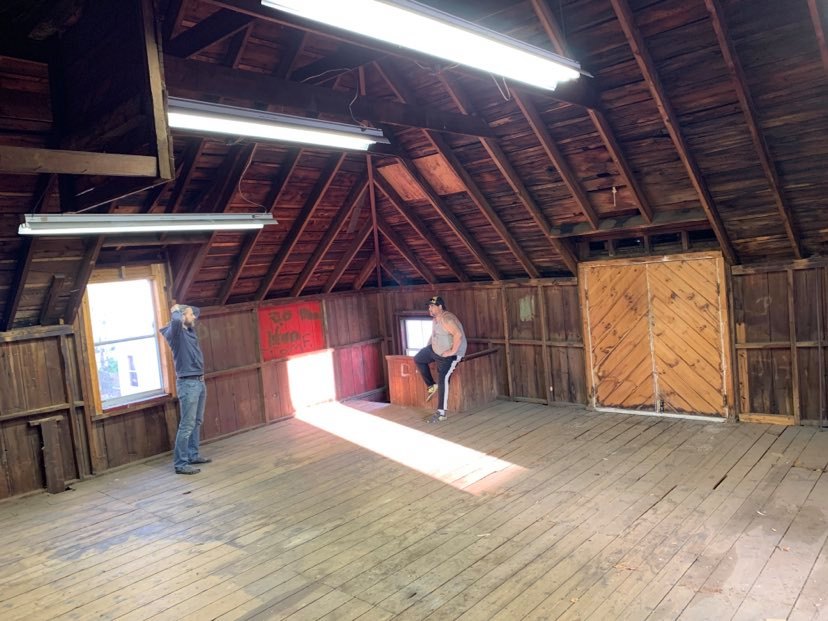 Loos awesome. what is nearby? The reason I ask... is it really necessary to float the floors and uber-insulate? But if you have close neighbors then probably need to keep music in and lawnmower noise out..

for heating/cooling, I've had a Mitsubishi mini-split system in mine (which is about 450sf; 19x25 ft with 15ft vaulted ceilings). One 1.5ton (18000 BTU) unit is enough to keep mine warm in the winter and cool in the Texas summer (but mine is constructed with 2x6" with brick exterior and double sheetrock inside... so lots of insulation). you can also get split systems that have 2 blower/fan units for larger spaces, more rooms, etc. Easier to install (no ducting) and very quiet too.

the downside to the split systems (and an uber sealed room) is that no fresh air comes in - it's mostly recirculation. So I open the door every so often and have one of those 3M air filter machines too.
Mike
www.studiodrumtracks.com -- Drum tracks starting at $50!
www.doubledogrecording.com
Top

Thank you Mike! I will look into that Mitsubishi setup.

My neighbors are right behind me, my house is nearby and other neighbors too, so a bit of soundproofing/minimizing is necessary. Luckily all of my neighbors so far have been super cool and think it's a fine idea to get the studio up and running..... I mean, they say that now.... But I'm respectful and I'm not going to be tracking drums and cranked SVTs at 10pm on a Monday.

Maybe a floating floor isn't necessary, though? I definitely need to build upon the existing floor as there are gaps in the boards and I need a nice flat surface, if I can help it. I am just figuring that if I'm starting this from scratch, how can I do it all "right" from the start?

For heating/AC the mini splits really are great/efficient/cost effective and easier to install.
They all have remotes which makes it easy to turn them off for a take if you need to for noise but they are pretty darn quiet generally.
Make sure you get one that also does de-humidify. A lot of times that can really cool off your space and it's a lot cheaper energy-wise. Ours would get your place 'sweater cool' in the dead of the summer just on humidify.

If you don't have Rod Gervais book Home Studios: Build It Like The Pros get it now.
It's a tremendous resource. Not only does he give lots of real how to tips backed up with data but he also reviews currently available products with test data.

Doing it right 1 time is cheaper than doing it twice.

Thank you Eric!!! I will get that book now.

The book is also super helpful when dealing with contractors.
Most have not done the kind of build out you are about to embark on.
They haven't dealt with the specific materials and the tolerances needed.
The book really shines in this area.
http://www.cowboytechnical.com/
http://ericambel.com/
Top

+1 on build it like the pros. That is going to be an amazing space, I want to play my drums in there RIGHT NOW.

Forget floating the floor. In order to do it right you need serious mass and science, I'm talking an isolated slab on sylomer pads on crazy heavy duty springs rated to resonate at like 2hz (look up Northward Acoustics builds if you wanna see what I'm talking about), all of which is stuff you're not going to do on the second floor of an old barn.

How many sq ft is the space? Do you own the building and/or what's happening on the first floor?
www.oldcolonymastering.com
https://morespaceecho.bandcamp.com/
Top

Yeah, my first thoughts would be to seal and insulate what's already there, and then do a room within-a-room thing if you know a contractor who can engineer a second ceiling on floated walls. It's quite a bit more extensive, but if done right will contain a lot more db.

Otherwise you could go with a half measure closer to what you're saying, and hang your drywall on some of that z-channel (hat channel?) metal so it's a little further from the load bearing walls to let it wiggle a little more. Double the drywall with some green glue in between.

The biggest question for your neighbors is if anyone's gonna be setting up an Ampeg 8x10 fridge, that low end is the hardest to tame.
Last edited by losthighway on Tue May 04, 2021 5:56 pm, edited 1 time in total.
Mo' mics mo' problems.

Another +1 on Rod's book. The only thing I would add (and if memory serves, the book addresses it), is that you'll want to make sure the structure can handle all that extra weight up there. There are span calculators that can help you sort that out. Looking forward to seeing this progress!
Top

One of the better basic soundproofing references is free:

The materials it uses are commodities, available nearly anywhere.

I'm also a big fan of Philip Newell's books, but they're not as hands-on as Gervais', and full of materials that don't exist in North America. But a more comprehensive overall approach, which distinctly identifies that control roooms and recording spaces can be designed with differing goals in mind.

The ol' Jeff cooper book is showing it's age. Everest's Handbook is full of factual, useful information...his ...On A Budget book is probably surpassed by Gervais.


For soundproofing, the whole thing is only as good as it's sealed airtight. You're building a submarine. Are there little gaps in the existing floorboards, wall cladding and ceiling? Fill them first, or block & insulate from inside.

Instead of a floating floor, I might recommend replacing the existing with T&G OSB. Easy to seal tight.

This is also a crummy time to build anything - lumber prices are through the roof thanks to the pandemic. I just built a bunch of traps and stuff with 2x3's, because they're less than half the price of standard 2x4's!


You might also consider starting the project with a knowledegable acoustic designer, someone who has handled similar projects before. You're not far from Eric Blackmer, as far as I know.
"What fer?"
"Cat fur, to make kitten britches."
Top

Just to agree with what's been said, your main concern is how much weight your existing structure can handle. I would be very surprised if that floor could handle much extra weight across the spans without serious reinforcement.

I converted my garage over the past number of years (finished just a few months before quarantine). What I did was make a room-in-a-room for the walls, then I hung the ceiling from hat channels in iso-clips so I could retain some of the height of the middle of the pitched roof. I had to move the existing ceiling joists up to be able to do this and got a structural engineer to tell me exactly what I needed to do, taking into consideration the amount of weight I was going to be hanging from them. I was pretty shocked with the end result in terms of isolation, as you can BARELY hear drums or amps outside when both doors are fully closed and sealed, and you're standing right next to the garage.

I'm guessing it's not an option for you, but the BEST place in a 2 story barn to build an isolated studio would be the ground floor. If you have a solid slab of concrete, you can put up new walls on top of that, then just rest a ceiling across the top of that.

Just chiming in to say I'm massively jealous. That would be an amazing space to have.
Top

Good advice in general, regardless of the price. I built a bunch of stuff in my room with 2x3's, just cause they're easier to deal with than 2x4's. I dunno if it'd meet code to hang drywall from them though? Certainly doesn't seem smart to hang multiple layers of 5/8", but I honestly don't know.


DrummerMan wrote: ↑
Tue May 04, 2021 6:57 pm
your main concern is how much weight your existing structure can handle. I would be very surprised if that floor could handle much extra weight across the spans without serious reinforcement.

+1 agree. I'd be talking to a structural engineer if I was doing anything serious on a second floor. Also agree about the ground floor being better but of course on the second floor you don't have to worry about it flooding! Which, let me assure you, is a nice thing to not have to worry about.
www.oldcolonymastering.com
https://morespaceecho.bandcamp.com/
Top

That's like a dream space for me. So good.
Ryan Slowey
Albany, NY