losthighway wrote: ↑
Wed Jun 16, 2021 9:15 am
I'm demoing 3 Josephson E22S at my place this week because somehow I have a shop in town that actually carries Josephson, and not only insists that I try one before I buy it, but instead that I enjoy the experience of having 3 setup, 2 on toms and one on snare.

Hopefully I don't get hooked, cause it would take me ages to put together my own set of 3.

Those have been on my short list since hearing some drums done with them. They seem super versatile, and those drum tracks I got with them sounded terrific.
Top

drumsound wrote: ↑
Thu Jun 17, 2021 11:19 am
I have a bunch of acoustic gigs lately, so I've gotten both a DW foot tambourine, and a Meinl foot cabasa. Today's rehearsal will be the first time with both...

I've also been known to take a loop of velcro and tie a few shakers around my ankle... those little foot tambourines are great though. I've got the Meinl version that straps to your foot. But after a few of these gigs i really want to play real drums! so I don't take a lot of thee kind of gigs. interested to see what you think after a few weeks.

Getting used to them is interesting. You really have to consider the backstroke. The Cabasa is cool, because there's a wing nut that allows for only downstrokes or both down and up to move it. The tambourine on the DW is pretty loud. I wish it were a single row.

As to the gigs, I bring those, a bag of toys, an office water bottle, and something light to sit on. It's fantastic. I can be loaded out faster than a guitarist!
Tony
Oxide Lounge Recording
Follow me on TWITTER!
DrumsToGo.net Live drums tracks by yours truly.
MEGAN HOSACK An EP Album
Sara Quah Taking me Back
WWRTBD?
Top

my something light to sit on was a Cajon... and yes, I was packed up before everyone else. One time I got stuck in traffic and showed up 5 minutes before a gig. no sweat, only took me 3 minutes to setup!

my something light to sit on was a Cajon... and yes, I was packed up before everyone else. One time I got stuck in traffic and showed up 5 minutes before a gig. no sweat, only took me 3 minutes to setup!

I just noticed that Meinl also has a "heel tambourine" that looks really cool.

I have a Cajon at my dance accompanist gig and I never play it. I find it really uncomfortable on my back.
Tony
Oxide Lounge Recording
Follow me on TWITTER!
DrumsToGo.net Live drums tracks by yours truly.
MEGAN HOSACK An EP Album
Sara Quah Taking me Back
WWRTBD?
Top

I agree. I usually had some layers of foam or something on top of it, but it is an awkward position to play. they do make those remote Cajon pedals now... but if I'm doing that, I'm just playing my Ludwig Breakbeats kit (16" kick) and I'll even throw on the tea towels if I have to.
Mike
www.studiodrumtracks.com -- Drum tracks starting at $50!
www.doubledogrecording.com
Top

I bought DT770s recently, mostly because of fond memories of trying them out many years ago, & because they're a lot cheaper than they used to be. When my kid tried them on, he was like, "Wow, those sound good!" Which is what's great & not-so-great about them. The mids are a bit recessed, I think--certainly compared to the Yamaha HPH-MT5s they replaced--which makes it a little more difficult to suss out midrange issues--but they do allow me to hear issues in the high/high-mid range much bettter than the Yammies. As I get more comfortable with them, it gets easier to figure stuff out on them. And of course I have monitors and those semi-broken Yamahas to help sort stuff out as well.

Also, I like the roominess of the earcups on the 770s--very comfy for me.

I swapped for a pair of DT770s, for the same reason Winky cited. They are good, but man, I think I am fucked forever now after using the ATH-R70x's extensively over the past year. Nothing sounds nearly as good, apparently. They just suck for monitoring if there is any kind of bleed happening from adjacent rooms. If I could find a pair of closed-backs that ballpark that sound for when I'm in shitty "control rooms", I would be golden, but between the DT's and my ATH-M50x pair, I think I'll be able to get sounds that translate fine as long as I double check with the R70s when the band isn't playing.

At worst, I have another set of nice headphones to offer clients.

Compared to my ATH-M50x's, the DT's sound more accurate and less hyped in the low/low-mid area, but the high end sounds unnatural to me. Very bright. Maybe that will mellow out over time. I'm a little suspicious of the "break-in" period thing, but we'll see. The low end extension is there, but it's not super prominent. The R70s and M50's have a lot more balls. The latter being less accurate for sure, but still makes for a slightly better listening experience.

The DT's and R70s are a lot more comfortable to wear for long periods. The Neumanns' are so heavy that I felt like I was straining my neck muscles holding my head up with them on, and the M50s are very tight. I have chronic TMJ inflammation and the M50s don't jive with that so well. Not an issue with the others.
Ryan Slowey
Albany, NY

I think the highs on my DT 770's have gotten a little better with use. I was coming from a pair of MDR-7506 and I feel like the highs on those are just way too hyped (or maybe that is a side-effect of switching to the Beyerdynamic cloth earpads), so the DT770's sounded better even out of the box to me. and I find them comfortable.
Mike
www.studiodrumtracks.com -- Drum tracks starting at $50!
www.doubledogrecording.com
Top

Even easier to pull the trigger on that than with Eastwood's prices.
Backwards chords might take a while to get comfortable with.
Top

Yes, much cheaper, and looks kinda cool hangin' on the wall, also.

Just rec'd a MXR M85 Bass distortion what I got on the reco of a respected guy at talkbass. It's good, got the LE/Silicon option, but I have better, ex., the Zvex Basstortion I got recently.

But I really like this after a 1/4 turn on the truss rod:

guitar players were blowing their own socks off during rehearsals. I had one tilt-back stand and was going to buy another when I saw they were about $40 new now... so I used some scraps of plywood that I already had on hand. I could have put a hinge on so it would collapse, but I don't intend to take it out of the studio. And if next winter is like it was in Texas this year, then I may need this for firewood...

Found a Venezuelan cuatro on Craigslist. It's brand new and unplayed but frankly unplayable in it's current state. The bridge and nut are way too high making the action ridiculous. I'm going to see if I can get them shaved down and get it playing this weekend.

The cuatro is like an extra long scale baritone uke. The tuning is similar except the highest string is an octave lower than you'd expect (and two semitones higher than the lowest string). 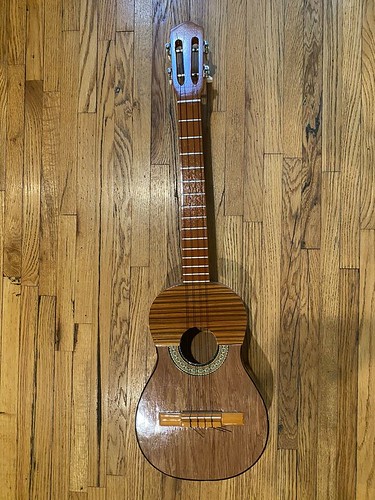 digitaldrummer wrote: ↑
Thu Jul 08, 2021 2:00 pm
so I used some scraps of plywood that I already had on hand. I could have put a hinge on so it would collapse, but I don't intend to take it out of the studio. And if next winter is like it was in Texas this year, then I may need this for firewood...

Well done. That's one of those word working designs that's so great because if someone asked me how I'd make one, I wouldn't know, but looking at yours for a few seconds I learn exactly how I'd make it.
Mo' mics mo' problems.

Users browsing this forum: No registered users and 80 guests