Stumbled across this, thought it was worth revisiting

"Here's a thread where you can name drop like we all want to do, but won't admit it. Who have you worked with, met in a restaurant, talked with on the phone, jammed with, parked their car in the valet lot, cleaned their hotel room, etc. PLEASE don't anyone take this too seriously, it's supposed to be funny. Keep them true, though.Here's my lame example: Dave Sardy's cousin is an ex of mine."

Verna Felton is my great great aunt. A zillion character roles in film/TV... most notably the voice of Pearl Slaghoople, Wilma Flintstone's Mother

I gave Jello Biafra a few of my Munchos just after the last ever DK show, Feb 1986, Freeborn Hall Davis. Yes... Munchos, the processed potato snack. 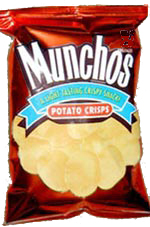 I made Jonathan Richman angry. My college band opened for him in San Luis Obispo. When I noticed him in the audience, I broke into a short improv rendition of a medley of his songs. He was unamused. After our set was over, and he was preparing to go onstage, we crossed paths. He got right up in my face and told me never to do that again, that it was very unprofessional. Michael Franti of Spearhead asked me to play bass in a band he wanted to form. He was a Sr. in High School, I was a sophomore. He saw me playing bass in the High School Jazz Band (I sucked royally, didn't even own a bass yet). I suspect he asked me because I was the only person he knew of with access to a bass. I told him the bass belonged to the school (true) and that I wasn't comfortable with borrowing it on an extracurricular basis. He went on to form The Casual Tease, a decent high school ska band, with his best friend Franz Wisner, who went on to be Press Secretary for right wing CA governor Pete Wilson

I try hard not to mention famous people I met/know because people instantly assume you are trying to gain some sort of social advantage out of mentioning it, or that you are lying. It's funny because I know I am a nobody and am quite comfortable with that, but there are some good stories, so I made a new account and here I go-

I grew up with Tom Morello of Rage Against the Machine. He was a grade ahead of me in school and a really cool guy. I always admired him for being an intellectual guy without being an intellectual bully. Amazing guitarist even in High School. Not exactly creative at that point though. He sure as hell figured that out though.

I also grew up with Adam Jones of Tool. Also a really nice/cool guy. Very talented musician. At one point he was feeling constrained by his guitar playing because he could play almost anything, but couldn't make up his own stuff. He asked me to teach him how to play "punk rock guitar." I thought he was trying to pull one of those high school humiliation tricks on me, so I called him on it. He made it clear he was being sincere, so I gave him two lessons. They were very "karate Kid" type things- play one week without playing anything you ever played before, and then play one week only playing what you hear in your head from what you made up the previous week. I don't know if those were the actual lessons, but something like that. There wasn't a guitar anywhere near at either lesson.

Maureen Herman from Babes in Toyland went to our high school too. I didn't remember her until we were at a party at Tom's and hung out with her. We used to make fun of this one girl who was actually pretty cool during study hall.

I auditioned for the Smashing Pumpkins in 1991 or so. Billy Corgan was really up front about his intentions and what he wanted to do, and that he was the artistic force of the band etc. Also a top notch person. Anyone who tells stories about him being an ass is probably someone who tried to take advantage of him and didn't succeed. He doesn't suffer fools, and takes credit for what he does. We talked on the phone a couple of times, we met once to share the music we were writing. He asked me what I thought of his music, I told him I thought the songs were too long, too slow, and that he whined too much when he sang. He took that like anyone who is honestly asking your opinion, with a smile and a thanks. Even after basically telling him I didn't like the music, we still met to play music at the Metro in Chicago in the small stage area. Afterwards, when I was loading my bass amp, he said "it was fun, but we both know it's not a match." He shook hands and I left. This was before they were really famous, and if I had it to do all over again with knowlege of the future, I wouldn't change a thing. They would have sucked even worse with me and I wouldn't have had fun.

Another thing he told me, not verbatim, but this is close- Imagine there is an apartment building with all the songwriters in the world living in it. Some live at the lower levels, which is not a bad thing, it's an honor to even be in the building. Someone like George Michael gets to live a little higher than he should, and all his neighbors hate him, and Tom Waits could live in the penthouse, but he choses to live in the gutter. Billy told me he wanted to live where he belonged, and he figured that was somewhere above the middle, but not the top. He asked me where I wanted to be, I told him "single family detached, so I can have my own studio in the basement and nobody to tell me to keep it down."

This is getting long, so that's it for now.
Top

My mom went on a date with someone who was an extra in "Hawaii Five-Oh" He played a cab driver.

I might have been in an episode of "ER." I was waiting at Union Station here in Chicago, and they were filming some scene where the doctor with the eyeglasses was running to catch a train. I was just sitting there reading my book, every once and a while looking up at this poor guy they made sprint 100 yards about 20 times, someone came over and told me I might have been "in frame" and they needed me to sign a release. I signed it.
not to worry, just keep tracking....
Top

I used to cook for Phil Anselmo and his wife a lot at an old resturaunt my wife and I worked at. She was their favorite waitress. I was always jealous cuz I would be stuck in the kitchen while she was talkin it up with them. They gave us some cool merch once (DOWN lighter - my fav) and a CD of Steph's (his wife) solo music she had done in the studio down the road from here with Dave Fortman. Phil sang on a track on that album. I mean, he actually really sang. Not like any of his other recordings. The guy has a really great voice. I'll also never forget the time I saw his truck slammed perpendicular into the wall of the Causeway coming back from a Super Joint Ritual show. It was his birthday that night. Strangely enough, only a couple years earlier I was in a wreck on that Causeway, on my birthday as well. Anyways, those are cool memories.
Top

My first band used to lead off for the Replacements and Husker Du all of the time in the early eighties.

People always talk about that era like it was just wonderful, but what I mostly remember is being lost far from home with a bunch of obnoxious twerps.

I do wish I had talked more to Paul Westerberg though.

Years later, when I was a composition student far from the world of Rock, I was a dishwasher at a place, when who should be hired as my new co-worker but a freshly fired Bob Stinson.

But what makes it really weird is that we didn't reminisce about playing at First Ave. Not at all.

We talked about growing up listening to Yes, and wasn't Bill Bruford way better than Alan White, and what was that Dan Hedges guy talking about??

I purchased a snare drum from Jimmy Chamberlin (drummer of the Smashing Pumpkins). It was used on two songs from the Mellon Collie and the Infinite Sadness album.
Top

I hung out with Utah Phillips just last night. That's gotta count for something, right?
Top

When I was a kid, before I got a guitar, I was at my friends house playing with his guitar. He showed me how to play a D chord. I went downstairs where our parents and a bunch of adults were hanging out and excitedly showed them I could play a D chord (I was trying to get them to buy me a guitar at the time).

So this cool old guy picks up the guitar and says "here's a riff you can play with the D chord, and then here's a G and an A". He was teaching me the classic 60's tune "Eve of Destruction". The man teaching me that song was Barry McGuire. Not only did he have a huge hit with that song- his backing band was the Mommas and the Papas. "California Dreamin' " was originally going to be on his record, but they were doing their record and asked if they could put it on theirs. He said sure. They recut the lead vocals and put the flute solo on there, and that was the single.

Of course, I just thought he was some old guy.

i once knew a girl from nantucket...
Top

Who kept all her clothes in a bucket ...
not to worry, just keep tracking....
Top

Years ago... I wrote a song called Eraserhead, based upon the Lynch film. My bandmate at the time sent him a cassette of the tune, and a year or so later chanced upon him, giving a lecture at UCLA. He asked Lynch if he remembered the song, and Lynch happily repeated remembered lyrics from the song to my bandmate...

On my new CD, I have a couple of other Lynch related tunes, and I recently handed him an unfinished CD at a lecture he was giving at AMU in DC. Haven't heard back yet, tho...
MOTHER Loves You
Top

Brian Johnson of AC/DC once bought me a pint of Guinness.
Top

scottymac wrote:Brian Johnson of AC/DC once bought me a pint of Guinness.

Please tell me he sang a little of "Have a Drink on Me". That's so awesome.
Top

I opened up with a friend for garth hudson from The Band. Backstage I got to see the tiny saxophone that he plays in The Last Waltz. I also got to give a very confused garth directions on how to get back stage(actually downstairs at Slim's), after he left the sound check.

He looked left, right, then at me and said "Where's down?" He'd been backstage just about 20 minutes before then as well.

That guy can still tickle them ivories though.