hahahahahahahaha i don't remember which guitar that was, but it definitely had a pointy headstock.

i dug up some more old 4 track stuff recently. some gems. but fucking wailing is still my masterpiece from that era.

Ha! Yeah baby! You remastered it didn't you. I can make out the bass line much more clearly. freaking wailing indeed.
Looking forward to the reunion tour.

the reunion of me, my 4 track, and hands that could do that?

i think i did 'remaster' that actually, i tried to ease up on the 3k shrill, make it slightly less painful.
www.oldcolonymastering.com
https://morespaceecho.bandcamp.com/
Top

Better than ever version duly downloaded.
Say, you wouldn't happen to have a long-hair-super-strat-back-in-the-day pic to go with it as an "album cover" for the tunes library?
Y'know, from back when we used film cameras.
Don't mean to put you on the spot. Oh, and preferably signed.
(waits patiently.)

fortunately for me there's no pix, but i made you this: 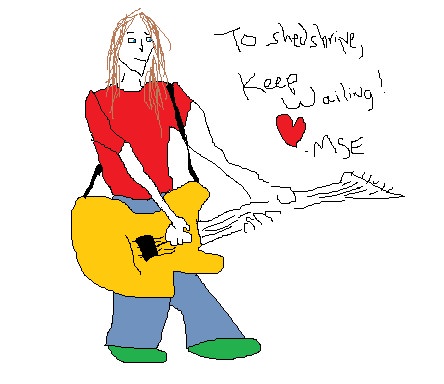 (had the kid help me grab a thank you shot) 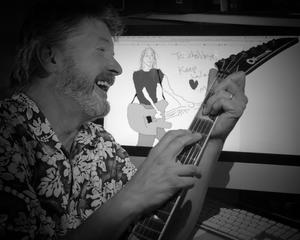 how do you like that charvel? a friend has one, i was teasing him until i picked it up. plays like a dream, really nice guitar.
www.oldcolonymastering.com
https://morespaceecho.bandcamp.com/
Top

I got a gig on an oil tanker one summer going back and forth from Richmond, CA to Valdez, AK, but ended up in a shipyard in Singapore for 3 weeks along the way.
When i say gig I don’t mean playing top 40 on a cruise ship, I was in paper overalls mucking out the shale that deposits in the hull of these tankers over time from loading and unloading crude. The large waves that come up under these 2 football field long ships and slam the bejeezus out of them in the middle of the ocean can weaken the welds over time, so they need to be checked. Hence Singapore shipyards.

Singapore was like the sixth largest shipping port in the world then. While there on a day off I checked out a local music store. Japanese stuff everywhere.I was pretty flush with cash and wanted to finally get some nice gear,

I grabbed one of the first digital keyboard workstations, a Korg M1. I didn’t play piano, but just messing around with the piano patches there in the store made me want to. And fumbling through the basics of it’s onboard sequencer the lightbulb went off about the possibilites. I had a boom box on the ship, So even with just its stereo recording to cassette capability, with this M1’s 8 tracks of sequencing, I could just record guitar along with its tracks at the same time. Awesome!

My “amp” i had already owned and brought from home was an early Tom Scholz Rockman soloist. So now with all this new firepower you can guess what I did most nights on the ship travelling back across the Pacific.

Anyway, in addition to the M1, I was oggling the guitar wall and saw this beautiful pointy Charvel. The first one I pulled down was dark gray (black?), and was really resonant and very light, but at the time I really wanted a red one, so the sales guy went back and got me one in red. I’m just remembering this now. In any case, it wasn’t far off from the gray one. And the red one had a Floyd Rose, I think the gray one had had a wilkinson.

Yeah, that wide flat neck is no joke, I loved how finger finger style its like a classical with lots of room. And of course it practically screams at you to maybe go a little faster than you would play otherwise, it was so buttery smooth with brand new super jumbo frets. And the neck thru design (Model 6) looked so sleek and cool from the back, and that early Floyd Rose allowed you to pretty much go nuts and not go out of tune. And the workmanship was so good. The shark fin inlays and neck binding were so precise, and the finish was so damn glossy smooth, I don’t know, it looked like a Ferrari with strings to me at the time.

II think I paid $600 Singapore dollars there in 1988, no tax charge. I played the s$&% out of it, the frets are completely shot still as I haven’t got around to having it refretted.

Changing course a bit here. And I know I am rambling but…
I remember you saying at one point on these boards that yeah, you were a bit of a prodigy in the shred thing then, but wished you had written more songs. I hear you.
At the time, Van Halen had been around awhile, Steve Vai was doing Crossroads scenes..Yngwie was killing it. It was shred time. it was challenging, it was precision and speed and crazy runs. Hey, it was fun. And it’s not as if all those chops went for not. You can just as easily still play big ringy cowboy chords, whatever the song calls for and all that.

For me, I keep being reminded of that old adage, many are called, few are chosen. I poured my heart out onto four track cassettes for a few years. That started in earnest while I was living in Japan teaching English.

Being that far away from home, and pretty much everything I’d known, I found a peace in myself that at first I couldn't place. it was like I was finding myself holding all this heavy stuff that had always weighed on me but I’d never dealt with out at arms length to examine and observe. . the parents divorce, the “mad at dad” stuff. I’ll spare you the specifics, we all have our stories, but the point is I now had some distance and perspective. Over there it put distance between that time and now, I coud hold it in my hand and look at it for the first time as a separate thing..

And then I found that If I could just somehow play what I was feeling a crazy thing would happen. By creating the perfect atmosphere for where my head was at, words started to come. I was gone. It was all that mattered for several years. Ready for prime time stuff? Probably not. But then It was never about that.

so that started my love affair with music, with recording, with gear, with TapeOp, all of that. These days I am more of a music fan than practitioner seeking out my favorite stuff on vinyl and putting together vintage stereo systems.

But I'm not about to sell off my recording gear and guitars. Man loopers are fun. With no agenda, just finding some random cool little progression or lick and you’re off to the races. hmm..what would go with that part? Something up in the higher register, but maybe half time to that first loop. Needs a pad now. ooo, a little solo right there. damn. (hits Undo). okay, here comes that section, ...wow, that wasn’t what I meant to do but I like that better anyway!. Maybe I should simplify that first riff. *starts new loop to experiement. etc. etc. etc.

shedshrine wrote: ↑
Sun Jul 15, 2018 1:00 am
So now with all this new firepower you can guess what I did most nights on the ship travelling back across the Pacific.

yeah, that sounds like a really nice environment to make music in.


so the sales guy went back and got me one in red.

haha nice, my friend's is ferrari red too! yeah the workmanship is really good, and it sounds good unplugged, that was the first thing i noticed when i picked it up.


I remember you saying at one point on these boards that yeah, you were a bit of a prodigy in the shred thing then, but wished you had written more songs. I hear you.
At the time, Van Halen had been around awhile, Steve Vai was doing Crossroads scenes..Yngwie was killing it. It was shred time. it was challenging, it was precision and speed and crazy runs. Hey, it was fun.

it was super fun! what i really loved even more than shredding was playing heavy riffs. i'd put a beat on and then just make up riffs. i had a pretty killer right wrist and i could downpick with the best of 'em, but even still, after a certain amount of time doing that, your wrist/forearm is like NO MORE and starts to seize up. so when that time came i'd just start wailing, cause it was much easier on the wrists.

and when you're young and can spend all day skipping class and playing guitar...and you do that for years...you kinda get to be pretty good at it.

i'm all about the ringing open cowboy chords now though.


I poured my heart out onto four track cassettes for a few years....so that started my love affair with music, with recording, with gear, with TapeOp, all of that.

Some evocative writing there guys!

Re loopers: I have one, just never really dug the limitations after the first cuppla times playing it.

I'd rather record and play on top.

Altho', if I could do what she does:

As Forrest Gump the musician might say, Loopers is as loopers does. So many versions out there now. So many uses.
You can use them like KT there, a one man band, you can use them for performance art, I’ve seen some incredible beat boxing/vocalizing type usage, For augmenting a live gig in a band setting, for aural fingerpainting (my current use), for kickstarting and fleshing out ideas. I mean all the stuff you can do on a little laptop DAW too obviously with the right triggering I suppose, it’s just a workflow thing right? It’s dedicated hardware for the purpose. If that floats yer boat, you’re golden. So many ways to skin your cat nowadays . Yes, that is a strange saying.

Anybody tried one of these? Kslight? Looks pretty bad-ass!

Looks interesting, I remember hearing about this, I think it was a kickstarter...as a rule I don't crowdfund gadgets anymore. But I haven't tried it, I guess I didn't realize it was available...looking at sweetwater it appears pretty recently came out. At glance I don't see any flaws considering the form factor, other than its not the cheapest thing out there. There's sort of something that happens where a looper becomes more of a sampler, when I see something say it can have 36 loops per song, I think, how does one even trigger those? Is that how people use a looper? Doesn't an MPC make more sense at this point?

I'd love to try one tho. It looks cool, unsure if its too complicated for a pedal..
Top

But..but he said it was easy to use!

Users browsing this forum: No registered users and 62 guests