Judas Jetski wrote:Found one of these at a government surplus auction. It was a later model, one with the modular confabulation bypass circuitry.

Sure makes it a lot easier to synchronize your cardinal grammeters

I've found that to be the case. The trick is, it's gotta be absolutely off-axis, or the phase transduction will cause spalling.
Check out the newest Andy Smash release, Black Light / Black Death! http://andysmash.bandcamp.com !


"Avoid trends and clich?s/don't try to be up to date/and when the sunlight hits the olive oil, don't hesitate"

snagged an Alesis Wedge in very good condition for $60.

it's not bad, especially after some tweaking. the TRS ins and outs are a nice bonus, too.
?What need is there to weep over parts of life? The whole of it calls for tears.? -- Seneca
Top

Picked up another Alesis Micro Limiter. I don't even know why beyond the fact that it was $50 and I couldn't stop myself.
Dave

got an MCI JH-110a 1/4" 2-track machine. in sort of working condition. More for the purpose of fixing it up and learning about it, rather than actually using it (I don't have any room in my studio, so it's hanging out next to my washer and dryer).
Top

I raped this off of CL, paid $60 cash money. Allen and Heath SR-8 in beautiful condition w/ PSU. I just got this from a Goodwill in Seattle. Ace Tone Top-7 organ in good shape.
I'd never heard of an Ace Tone until I heard one recently..a small story:
My girlfriend won 2 tickets to the Pickathon festival. Three days, multiple stages on a farm outside of Portland. My favorite performers were Sharon Van Etten, Shakey Graves and Jessica Pratt. Jessica Pratt is a folk singer from San Fran whose debut album was recorded on a four track years before getting noticed. She was playing with a guy who played guitar and organ. You can hear it in this first link:
http://www.youtube.com/watch?v=prv78TqLhag
And here's the concert setting - probably the prettiest place I've ever seen music being played.
www.youtube.com/watch?v=f3dVoZjDrZg

Anyway - I was just floored by how beautifully this organ complimented her songs.
I went up afterwards and spoke to the guy afterwards - no idea who he is, can't find a reference to him anywhere. I went home and started researching Ace Tone, and found this one on ebay. The more picturesque red Top-5 gets the most attention online, but this one actually has more sounds. And I am astonished at how well it takes to effects pedals. It sounds like a synthesizer, a Vox or a Hammond depending on how you set it up. It weighs 35 pounds!

I sold my L-100, Leslie and Kurz K2600 this year, Bought an SV-1 and now, with this organ, am feeling ready to get out there with a leaner, if less mean rig!
I've got the obscure vintage keyboard bug now too. Cheap, light and musty!
Top

The THX corporation had a liquidation sale today. Most of the good stuff was already nabbed when I got there, but I got 10 ADC TRS patch cables for $20. I think they cost $20-30 a piece new! Not the most exciting acquisition, but hey. 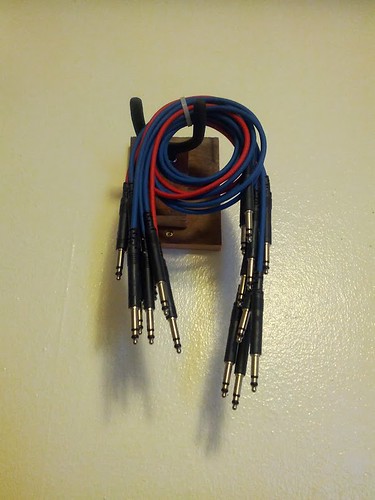 A foolish consistency is the hobgoblin of little minds.

here's what i just bought/installed at my place:

Just picked up another Altec 1589B offa the E-bog; here's hoping it works.

here's what i just bought/installed at my place:

What is this case like? I've been thinking about getting one.

Users browsing this forum: No registered users and 35 guests