That SSL clone thread got me thinking - there are a lot of people here doing some awesome fabricating. Anyone want to post pics some of their stuff?
"I have always tried to present myself as the type of person who enjoys watching dudes fight other dudes with iron claws."
Top

Shouldn't this be in the DIY forum?

These pics are a few months old. I'm still working on this unit, but mainly cosmetic things. I plan to add a power LED and LEDs for the phantom, as well as some kind of lettering. 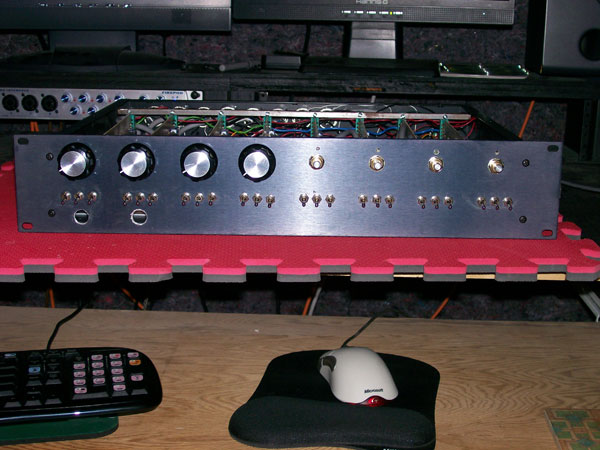 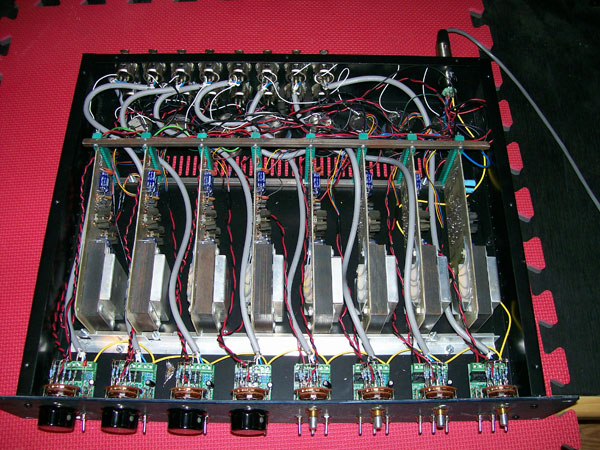 This is 8 channels of racked Quad Eight CA-127 or CA-137 cards (I think they are CA-137s, but not totally sure) with the original output transformers and new Cinemag CM-3440a input transformers. They use the Quad Eight AM10 discrete op-amp design and they sound bad-ass. Here are the cards:

I bought these off eBay in 2003 for $40 a piece. The guy had a shitload of them. I wish I had bought more, but I didn't have the bread at the time.
www.organissimo.org
organissimo - Dedicated (new CD)
"This shitty room is making your next hit record, bitch!"
Top

#2 and modification of power supply to power both mics currently in progress.

I have posted DIY pics before, most of them are in my DIY section:

'Well, I've been to one world fair, a picnic, and a rodeo, and that's the stupidest thing I ever heard come over a set of earphones'

*creates new folder for saving this type of gear pron*
?What need is there to weep over parts of life? The whole of it calls for tears.? -- Seneca
Top

Here is a preamp board I made for the MCI JH500D console.

Greg Norman
www.electricalaudio.com
Music I've recorded
www.normaphone.com
me me me me me
Top

Crap, I totally should have put this in the DIY section...

Nice work, guys. Tasteful stuff...
"I have always tried to present myself as the type of person who enjoys watching dudes fight other dudes with iron claws."
Top

Here's my Ruby amp built into an old children's suitcase:

fossiltooth wrote: That's like saying you hate Fenders because of Yngwie Malmsteen.

What is this case like? I've been thinking about getting one.

Real friends stab you in the front.

Some stuff I did last year:

Not really for recording, but useful in studio's. Its a video switch/line driver, plus an audio -10 to +4 balanced converter.. Now you don't have to patch video and use up two external returns for shit like a DVD player and a cable box on your console.

A board stuffed (first time designing with surface mount)

and three finished units. I ended up using different LED's because the blue hurt peoples eyes. I was pissed that the colors came out fucked up on it, you can barley read it if your standing in front of it. Live and learn I guess.

Here is a little DI I made to fit in a API rack. I used logic to control relays to keep the signal path nice and short. Push buttons change colors via LED when a function is selected. I'm working on one with "gain" on it so you don't have to use a mic-pre.

Beta testing in session. Sounds good. I like it better on guitar than my Manley DI.

Here is a little bipolar supply I made for racking shit up. I have a bunch of spare boards for sale, $5 + shipping if anyone is interested, Just add a xfmr to taste.

A couple pieces I put together for my studio.

Users browsing this forum: No registered users and 52 guests