the section of basement I can use for my studio measures roughly 20'x30', and I'm not sure how I should lay it out. My two options are a live room measuring 16'x20', and a control room measuring 14'x20', or I could make it a one room studio, where recording and controls are in the same room, and will measure 20'x30'. I would rather have the two rooms separated, much more professional I think, and makes tracking a bit easier. But I also don't want to have a live room that lacks. The dimensions for a two room studio are pretty much set in stone if I do it that way, because there are two support poles in this section of basement and I would build the walls around them if I did go with two rooms. So what do you guys think is the best way to lay my studio out? Go with two separate rooms, while sacrificing some size, or go with one large room?
Top

Building 2 rooms with any semblance of soundproofing will cost more than building one room.

Do you *really* need the isolation? If so, I'd say those 2 rooms are (barely) large enough to be useful. Otherwise, a 20x30 one-room studio would be quite spacious and will sound great (given good acoustic treatment).
Acoustics & Audiogeekery
Quality Audiogeekery in Northern New England
Top

that's what I've been thinking. the pro's of having one spacious room definitely outweigh the pro's of having two smaller rooms. I don't know why I keep going back and forth between these two scenarios in my head. I guess I just really want that professional room separation with the angled glass and the whole nine yards. my plans for acoustic treatments are DIY bass traps and absorbers. I'm just not sure how to lay that out yet though. I've been researching the stuff Ethan Winer built and I'm definitely going to do that, just not sure how much I'll need, and I'm not sure yet what to do about diffusion, if I'll even need it.
Top

I am in the same boat. Same size space. Every time I think I am sure I have decided I read something that changes my mind. I keep thinking I want two rooms because I can have two specific areas with different purposes. For me the one room makes sense because that's how I work. I can't commit to one room even though it makes so much sense.
Top

Gummy wrote: I can't commit to one room even though it makes so much sense.

Yes, in all my building designs for a space that I am contemplating building new (an outbuilding) I have decided on 1 room. But it depends on how you work and the space's purpose. I want a room that is large enough to mitigate some of the sound challenges of a smaller space. I also want something that feels open and airy. I can experiment with sounds and use playback as a way to key in tracking sounds. And then for playback and mixing I can use the same room. I also need it as an office for a day job.

The booth idea is a great one. I am thinking more about a few iso closets and then dividers/gobos on wheels for more separation or taking some of the room sound out of the equation. I am looking to heavily repurpose some materials I have -- old solid core paneled doors, etc.

And if I ever decided I really need 2 rooms I could always subdivide later. Oh plus the building expense would be lower for 1 room.

I'm pretty set on the one room idea. And there is a section of basement that I could use for a small booth to do vocals, and isolate amps during their tracking, as well as drum tracking if the drummer needs a guitar or bass track to play along with. it definitely makes much more sense to have one large room. and I figured out how I want to treat it using DIY acoustic treatments. the overall cost for all the materials is about $600, but that includes mid/high absorbers, high bass traps, and deep bass traps. and I was thinking of putting a wall of diffusion opposite the computer, behind where the drums would set up. my plan for this is to take 6"x1' panels of 1/8" ply wood, and bend them. each row alternating, one concave, one convex. the section would cover about 4'x8', with a mid/high absorber on one side, and a high bass trap on the other, with two deep bass traps in each corner. the two 30' walls would have 4 treatments on each total, mix of absorbers and traps, and in the middle section of each wall another block of area of diffusion across from each other. and the other two corners would have deep bass traps. all of the absorbers and traps would span from the floor to the ceiling, and have a two foot gap between them. for the ceiling I'm going with puffy fiberglass underneath the floorboards, and then fabric covering it, probably on an incline from the computer to the rear wall.
Top

I wouldn't make the poly diffusors concave, that will focus the sound which is the opposite of what you want. Make them all convex. You can use different sized boards and/or bend them at different angles, or simply make one big 4x8 board and bend it.

Not everyone is sold on poly diffusors, though. I count myself in this group.... they can be useful (better than a bare, reflective wall) but I think other types of treatments perform better.

Also, with the question of a booth, this article might be useful:
http://realtraps.com/art_booth.htm
Acoustics & Audiogeekery
Quality Audiogeekery in Northern New England
Top

what other types of treatment would you recommend? and thanks that article is great.
Top

Broadly speaking, I think bass trapping, and first-reflection management (at listening position and near recording areas) are more important than diffusion per se. That said, diffusion can be icing on the cake in a great room. I have the most experience with QRD-style diffusors, and they perform the best, imho: 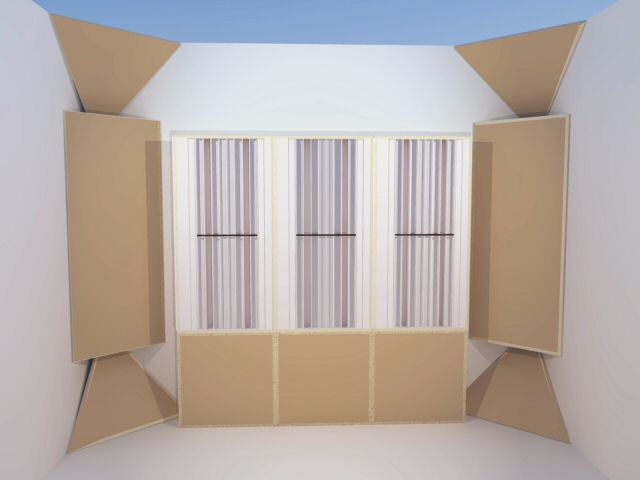 gotcha. I definitely would love to get the Real Traps Diffusors but $600 per unit is a bit pricy for me at first. I may just forget about diffusion at first and worry about the bass trapping and absorption, and then when I have the money purchase diffusion for my rear wall.
Top
Post Reply
12 posts • Page 1 of 1

Users browsing this forum: No registered users and 42 guests