I'm closing in on the final stages of converting my backyard garage into a mixing/writing/overdub room. The raw structure is a 13x22' single car garage with a 15' peaked roof running the 22' length of the building. The walls are cinderblock with a brick facade.
The plan is for a one room space where I can do mix work, overdubs on records that start elsewhere and write/record my own music and scoring work. I'd been doing that work out of my basement but a flood last month put everything in storage and lit a fire under my ass to finish the garage.
I'll post updates and photos here as it develops. So far the inside space has been framed and the garage door has been replaced with a 10x5 window. I've run 60 amp electrical to the garage with its own fuse box. Heating will be electric. AC will be a window unit for the time being but hopefully a mini split once funding permits. I’m having the whole place spray foamed on Thursday and drywall goes up next week.
Due to the smallish size of the space and the nature of the work I'm planning to do there I've decided against soundproofing. I built a similar space years ago and did the full double wall build. The results were OK but not great. This time around my priorities have centered around maintaining as much floor space as possible (hence no double wall construction) and having natural daylight (hence a giant window). I’ve spent my entire working life in basements and windowless bunkers. I want to see daylight for my remaining years.
Loud work has been happening at other people’s studios for a number of years now anyway so this will just be a logical extension of what I’ve been doing at home already. I figure if no one has called the police on me yet things are unlikely to change.
It’s pretty exciting. After a longish period of working hard and spending lots of money without things looking like they were making much progress it’s all starting to come together. I’m hoping to be in by the middle of October.
I’m very much looking forward to commuting across the back yard every day. 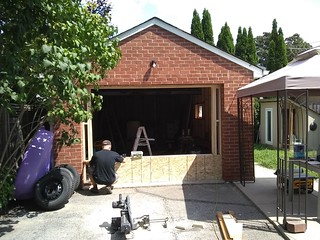 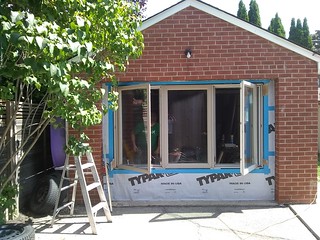 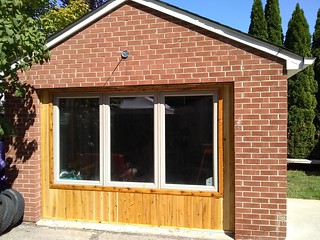 I felt EXACTLY the same way when setting up my current space. looks sweet Dave!
the new rules : there are no rules
Top

It will be fun to watch this come together.
Tony
Oxide Lounge Recording
Follow me on TWITTER!
DrumsToGo.net Live drums tracks by yours truly.
MEGAN HOSACK An EP Album
SARA QUAH Taking me Back
WWRTBD?
Top 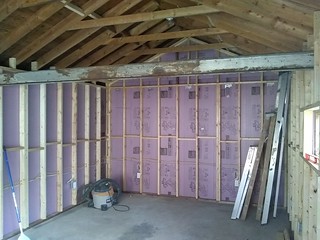 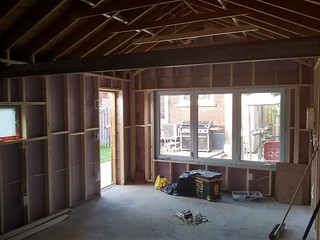 I’m debating removing the I beam that cuts through the middle of the room. It was holding up as loft storage area that has been removed. Now it it’s more or less useless but I’m sure removing it will be an expensive pain in the ass.
Dave

Looks like it's gonna be great.
I like the heck out of a window or two myself.
http://www.cowboytechnical.com/
http://ericambel.com/
Top

A.David.MacKinnon wrote: ↑
Wed Sep 19, 2018 7:00 am
I’m debating removing the I beam that cuts through the middle of the room. It was holding up as loft storage area that has been removed. Now it it’s more or less useless but I’m sure removing it will be an expensive pain in the ass.

EDIT: oops, i thought it was just a wooden beam you could just saw off, didn't realize it was a steel I beam until i looked closer at the first pic. i'd definitely wanna remove that if it was my place. not sure how you do it but i wouldn't think it'd be THAT expensive.

this is gonna be a nice space, that big window is great!
www.oldcolonymastering.com
https://morespaceecho.bandcamp.com/
Top

I’m debating removing the I beam that cuts through the middle of the room. It was holding up as loft storage area that has been removed. Now it it’s more or less useless but I’m sure removing it will be an expensive pain in the ass.

Ahem, you'll need to check with a contractor first. I did exactly the same type of garage build years ago, and we did end up having to reinforce the walls and roof with some more beams, in order to remove the ones going across the space. Not impossible to do, but certainly something to consider with some engineering skills, before doing it.
Realizing vibratory excursions from a paper widget.
Top

The i-beam is likely structural, tying the walls together to counteract the weight of the roof trying to spread them apart.
Village Idiot.
Top

Plus, the steel beam is perfect for hanging difficult clients.

I had thought that it might be structural as well but I had a contractor look at it early on in the process and his opinion was that it wasn't. His thought that it was likely installed for use with a block and tackle way back when the garage was being used as a garage.
The space is only 12-13 wide on the interior so the roof spread isn't that wide. The beam is just cemented into holes in the cinder block so if the walls were going to spread that wouldn't do much to stop them.
Who knows, it's a bit of a mystery to me. Either way, I'm scheduled for spray foam tomorrow and $$$ is getting tight so nothing's happening with the beam any time soon. But yeah, I'd make triple sure it was safe to remove first (if/whenever I get around to it).
Dave

floid wrote: ↑
Wed Sep 19, 2018 10:02 am
The i-beam is likely structural, tying the walls together to counteract the weight of the roof trying to spread them apart.

the collar ties are already doing that.
www.oldcolonymastering.com
https://morespaceecho.bandcamp.com/
Top

looks awesome so far! can't wait to see this thing come together. i've debated doing the same thing at my place but we have a finished attic/3rd floor and i'm able to use half of that (it has windows

floid wrote: ↑
Wed Sep 19, 2018 10:02 am
The i-beam is likely structural, tying the walls together to counteract the weight of the roof trying to spread them apart.

the collar ties are already doing that.

True. If the thing's just propped up there then the collars are all that's needed.
Village Idiot.
Top

Looks nice!
I'd be thinking about security too. Big windows next to the street (?) makes for an easy get away. hate to see that happen...
www.studiodrumtracks.com -- Drum tracks starting at $50!
www.doubledogrecording.com
Top

It's in a fenced/gated back yard. Not visible from the street and the gate locks from both sides (key access only). In theory you'd have to scale a 6' fence and scale it again with whatever you steal.
But yes indeed. Security is a must. I've been thinking about a loud as fuck alarm and a roll down shutter (like you see on store fronts).
I'd though about bars for the window but it's my secondary exit if there's a fire.
Dave