Hi Everyone. I'm looking for advice on combinations of mics and recording techniques to enhance vocals for my current recording project. It's a song-oriented indy band, three vocalists, sometimes 3-part harmonies over a full mix, two guys, one woman. This will be my third time tracking vocals for this band, and I am ready to up my game.

Tl;dr: if I use a dynamic mic like an SM7 for male lead vox, should I also use dynamics on all the backing vocals so they don't overshadow him? Conversely, if I use a fancy condenser on female lead vocals, am I better off using dynamics to separate the men in the background? Or do you recommend using the same mic for the backing vocals that I use for the lead, no matter what?

Also, how might I take advantage of the live and dead spaces at my disposal? I've only ever recorded vocals "dead" before. I tried a tiled bathroom in the early 2000s once but didn't get a good sound for a busy mix.

The singers: I will isolate all the vocal performances, so the backing singers won't be singing together at the same time (so a bad take doesn't mess up a good take). The singers are good but not professionals. The main male singer does that slightly off-key indy rock thing and sings "clean" (no grainy or growly stuff); the female singer is really good and also sings "clean" (same deal), and the second male singer has a sort of Warren Zevon voice and can sometimes be a bit shouty in backing vocals--he sings more sweetly when doing leads, but for this record it will just be one "big" piano ballad.

The music: Eclectic indy? It's all vocally and lyrically driven, but there is some uptempo punky stuff, a couple piano ballads, something swampy sounding, something PJ-Harvey sounding, and one song that starts out like an 80s 4AD track before descending into a total wall of fuzz.

The gear: I've got good pres and conversion (Great River NV, RME Babyface), and access to good mics: U87ai (borrowed), SM7, SM58, KSM32. I could also probably get my hands on a C414 (to borrow) or a ribbon. I could conceivably rent or buy another mic as well but this is less about specific mics than combinations that will work.

The space: I have a dead recording space at home, the bedroom, and a wonderfully live-sounding living room (great for acoustic guitar, though we already tracked those at the studio). I have baffles to prevent reflections I don't want getting into the vocal mics, and can move rugs around, etc. I also have a very dead sounding practice space that is pretty quiet during the day.

Mics: Last time I recorded the main male vocalist through an SM7, the other male vocalist (can be shouty in his singing, especially when doing backing) through the 32, and the female vocalist (probably a high alto) through a borrowed U47, which I actually found to be a bit "much" for the low end of her voice. All were recorded in my bedroom, with baffles to eliminate any extra reflection.
Top

Without hearing the singers it's always hard to advise but if it was me I'd try to identify what you don't like about the previous capture of each vocalist and then pick a mic that will address that issue.
If one vocalist has a sibilant voice I'd reach for something that tames that range (like an EV RE series ).
If a vocalist is thin and reedy sounding I might reach for a ribbon. Etc, etc.

I'd try to have more mics on had than you will actually need so there are some decent options to choose from.

With backing vocals I tend to high pass higher than I would otherwise.
Live vs dead is totally subjective and could change song to song.
Dave

I see you’re in Montreal. The Long and McQuade rental department is a huge resource for getting lots of mic options for little cash.
Dave

A.David.MacKinnon wrote: ↑
Tue Dec 31, 2019 12:52 pm
I see you’re in Montreal. The Long and McQuade rental department is a huge resource for getting lots of mic options for little cash.

There's about a million ways to go about this. Generally speaking I don't like to record vocals in a lively space. I feel like it interferes with intelligibility. You mention this project is vocally and lyrically driven. I'd go for a more controlled acoustic space.

Its a good idea to use different mics, in theory. Matching the mic to the singer, as well as its role in the production. To that, I've used different mics on the same singer for different songs on a record. But not always. With the people and mics you mentioned, I'd think the SM7 on the more gravely voice, as opposed to the cleaner male singer. I've not used a U87ai, only an older U87, which can also be good on a more gravely voice. The KSM32 might work on the woman, or the 87. I was not a big fan of the KSM32 when we had one where I used to work.

As mentioned, hi passing the backing vocals is often a good idea. I don't mind more aggressive compression on vocals in general, and sometimes even more on backing vocals. You can squash the hell out of them, and even if you mix them pretty far back, they still have a good presence.

I don't think I ever record any vocal without compression, often a lot of it. Lately I've been slamming the Purple Action (500 1176 type compressor) for rock stuff, and then still hitting something in the mix. And then automating to really make every word up front in the lead vocal. Sometimes I'm doing a little parallel drive (not distortion, just a bit of 'hair' peppered in). I'm really careful with reverb. I spend a lot of time getting the predelay time right. Its a combination of working with the tempo of the song, how rapid the melody is to the tempo, and the style of singing. I tend to keep the reverb really low in the mix. Lead vocal send is almost always lower than the backing vocal send.
Tony
Oxide Lounge Recording
Follow me on TWITTER!
DrumsToGo.net Live drums tracks by yours truly.
MEGAN HOSACK An EP Album
SARA QUAH Taking me Back
WWRTBD?
Top

Looks like you have more than enough good tools to get great results. Maybe more important than which mic you choose is how you position it: moving the mics around in front of the singers drastically affects how much head-voice, chest-voice, sibilants, etc. you get. One way would be to set up a LDC in front of the singer as close as possible and then raise and lower the mic listening until you hear the sound you want. I've recorded whiny singers with a chest-voice setup and scooped out some of that whine. Trial and error. But you've got everything you need!
~ ~ ~ ~ ~ ~ ~ ~ ~ ~ ~ ~ ~ ~ ~ ~ ~ ~ ~
I run the recording & video studio at the DC PUBLIC LIBRARY in Washington, DC. We have good days and bad.
IG: stormydanielson

Don't forget the psychology of the situation. You might get a cooler sound using what they're familiar with rather than using the best ever whizbang gadgets that the kids have these days. Especially in terms of arrangements. You might want to at least try recording it the way they practice it. Rather than one at a time.
Carl Keil

Can you set up a stereo pair out in front of them as they sing live together? I wouldn't be surprised if that captures a nice feel.
Do two solid takes of all the singers and mix them together. 3 singers X stereo track --> 6 voices. 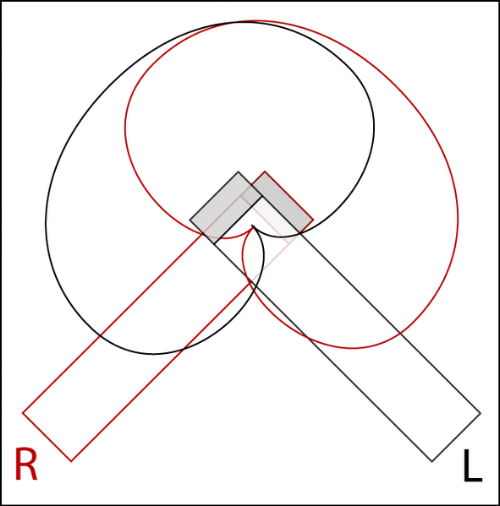 Lemme add that, since you don't apparently have two of the same mic, if yer gonna record multiple BV's as logancircle shows, just do one pass as depicted, and then flip the mic's from right to left (or have the singers move), if you want a more balanced group vocal. I would do that if I was doing two passes of two singers, for example.

FWIW, the Sm7b I have always works, the U87 clones sometimes work, the SM58 always works with its more lo-fi take on the SM7b, and I love my KSM32 on some vox - it cuts very well for a condensor (I think it's a mid-size capsule? like an AT4040?), and never seems to need much EQ inna busy mix -and it seems very un-colored and clear.
bandcamp; vlayman;
THD; Geronimo Cowboys;
blog.
I mix with olive juice.
Top

1. One mic for the singer, a different mic for all the BGs.

2. Backing harmonies, try having them sing together. It will take a little longer to nail, but once they do, oh my.

3. Have the band in the room or control room while recording anything. It helps encourage positive ideas and conversations, IF the band is into that. Recording people in total isolation is always bad. Always. Unless they are session pros laying down the basics. They know how to get emotional in the right way, to get good tracks. Non pros cannot do this.

4. Objecitively analyze the recordings themselves. Technically, what is not right? What is missing / too much, frequency wise?
Realizing vibratory excursions from a paper widget.
Top

To the OP and anyone not 100% sure about recording vocals, the answer is ...anywhere, and any mic. In other words, no need for a special space unless some isolation is desired from a loud band. As for mics, if you have two or three, just have the singer test them. One might be a tad better. As for separate tracks or recording a group together, both ways can get the same result. A group might enjoy singing together, which some do.
https://www.youtube.com/watch?v=kw1XTDcGgMs
Top

Thanks everyone. Lots of good thing to try. I might give joint backing vocals a try.
Top

For backing vocals, I love the X-Y pair idea, but I'm wondering what to use.

I DO have pairs of small diaphragm condensers: the Tape Op staples of the Crown CM-700 and Avenson STO-2. The Avensons are omni, so no proximity effect, which seems like a good idea. I didn't consider these as vocal mics, but perhaps I should.... Do people ever use SDCs in this kind of application?

Could I also get away with a cardioid pattern if I had two people closer together, or one behind the other (one male singer is taller than our female singer)? Here, the Neumann seems like overkill except it's got an omni option. Other choices (so you don't have to read up): Shure KSM-32, SM7, SM58, SM 57. Think I have enough Shure mics.

Users browsing this forum: No registered users and 19 guests