Subwoofer placement - is there a "right way"?

Subwoofer placement - is there a "right way"?

I recently started mixing with a sub. Is it important to have the subwoofer centered in your listening field, like underneath the desk in the middle -- or can it be "off to one side" as space allows without messing up panning decisions, etc?
Top

Experiment with the placement.

Really, the sub frequencies are omnidirectional. So it will be up to you to find the best place for the sub, that works
within your room.

You want it to work with your current speakers, and only make the sub speaker should only ADD to your Stereo setup,
in your listening position.

FWIW, on my living room stereo I bought two subs.

The rig is a 100 w./channel Sony receiver and Klipsch Synergy B2's with Yamaha subs (50 watts? 100?) under each Klipsch, about 6' apart. The volume and crossover point on the subs is dialed by meter and ear (around 60Hz) to be as smoove as I could.

Maybe I fool myself, but I can hear a difference in the stereo field between 1 and two subs when adjusted for volume.

Which makes no sense, I know, mebbe just psychological, but there I is.
bandcamp; vlayman;
THD; Geronimo Cowboys;
blog.
I mix with olive juice.
Top

I'd like to add in as a corollary--is there a WRONG way? Because I'm having a hell of a time managing the low end in my mixing room, and I'm not sure why.
New Judas Jetski EP up! andysmash.bandcamp.com

I'd like to add in as a corollary--is there a WRONG way? Because I'm having a hell of a time managing the low end in my mixing room, and I'm not sure why.
New Judas Jetski EP up! andysmash.bandcamp.com

I've been lurking here forever but really wanted to chime in for this one.

There is a right way but it does take some trial and error. This is a great place to start for understanding the most effective way to use a subwoofer(s): https://mehlau.net/audio/multisub_geddes/

Simply put, you want to use your sub(s) to excite your room modes so that they're filling in nulls at your listening position. But you have to measure and experiment with the polarity of your subs as well as with the direction in which your subs are firing. Yes, the low frequencies are omnidirectional but you're trying to make your room/walls part of the system as a whole.

An example from when I set up my small new studio room a few months ago including a conversation with friend of mine who is an acoustic designer for a global architectural firm - some of this stuff is counterintuitive even for professionals so that's why you have to measure, move, measure, move, repeat.

First, I put my two subs where the Room EQ Wizard room sim predicted the most optimal positioning, but I still had a huge peak around 170hz. 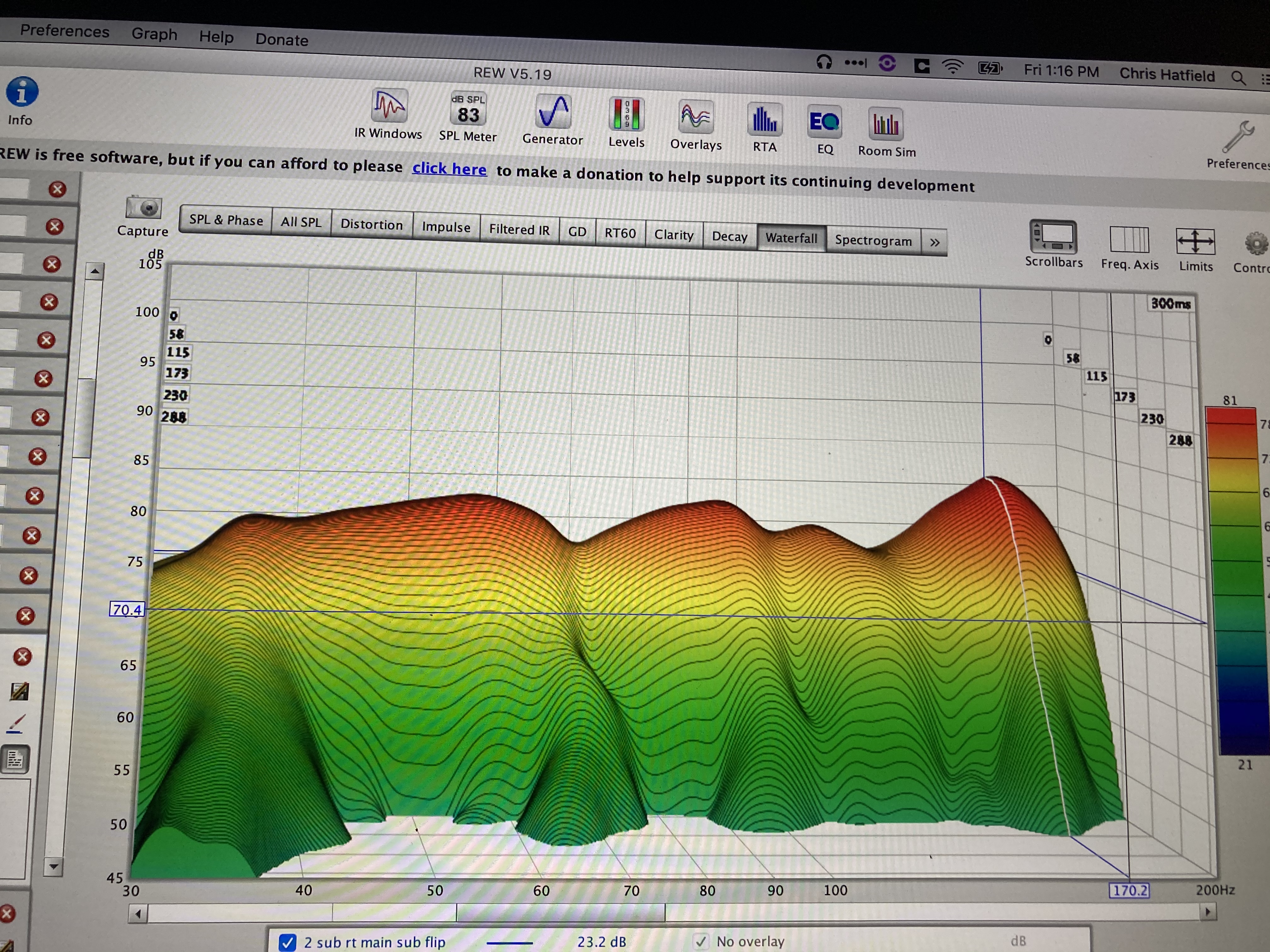 So then I realized that this closet in the rear of the room was still part of the room acoustically speaking and instead of trying to eliminate it from the system maybe I needed to try to utilize it instead, so I put my second sub inside the closet but facing out toward the room. 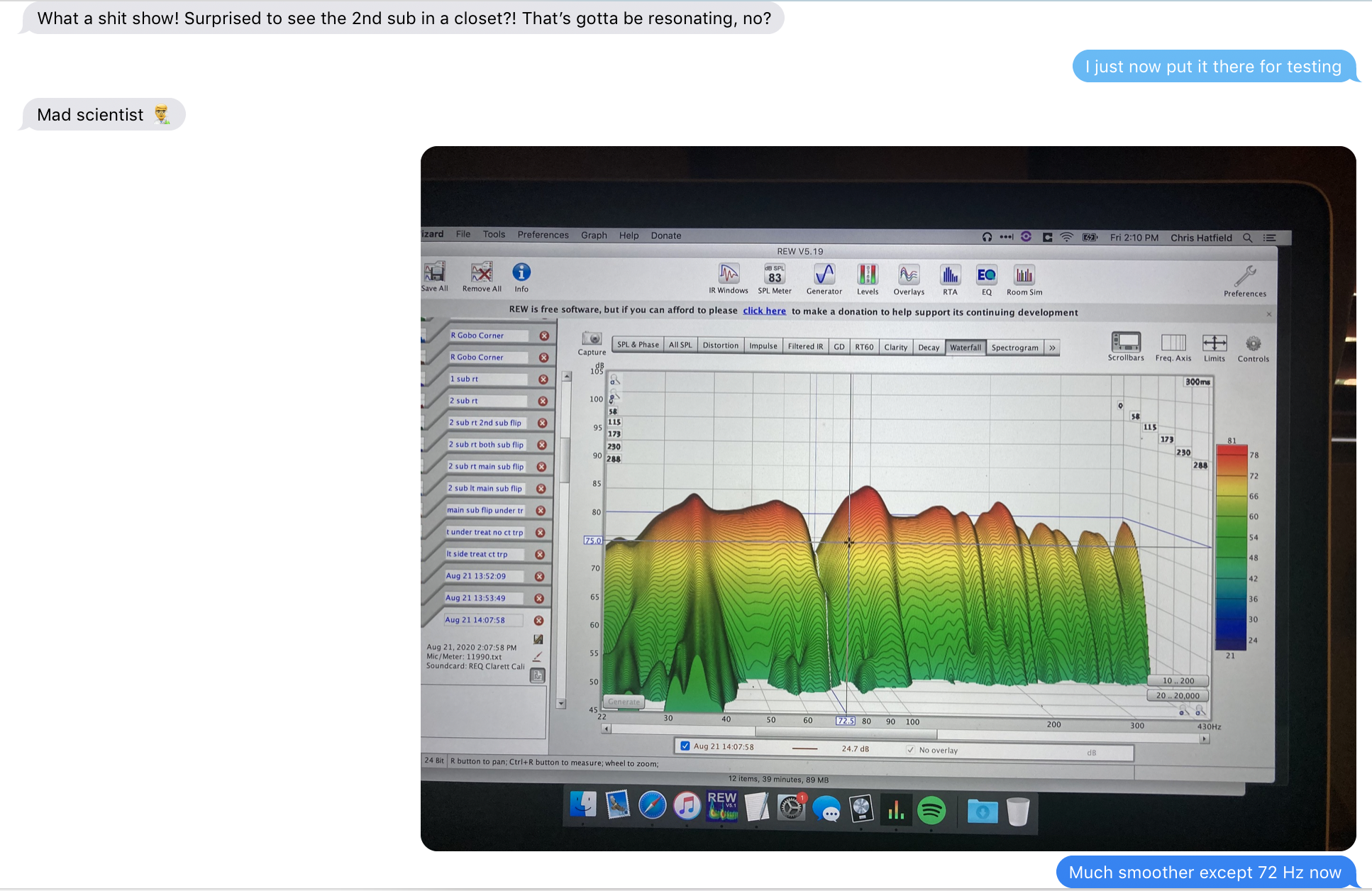 That helped with my initial problem but created another one, which was a BIG null around 72hz. What to do? I had four different directions the sub could face plus polarity switch in each direction, which meant 8 different possibilities just for that one position for the second subwoofer. Measure, repeat, measure, repeat. 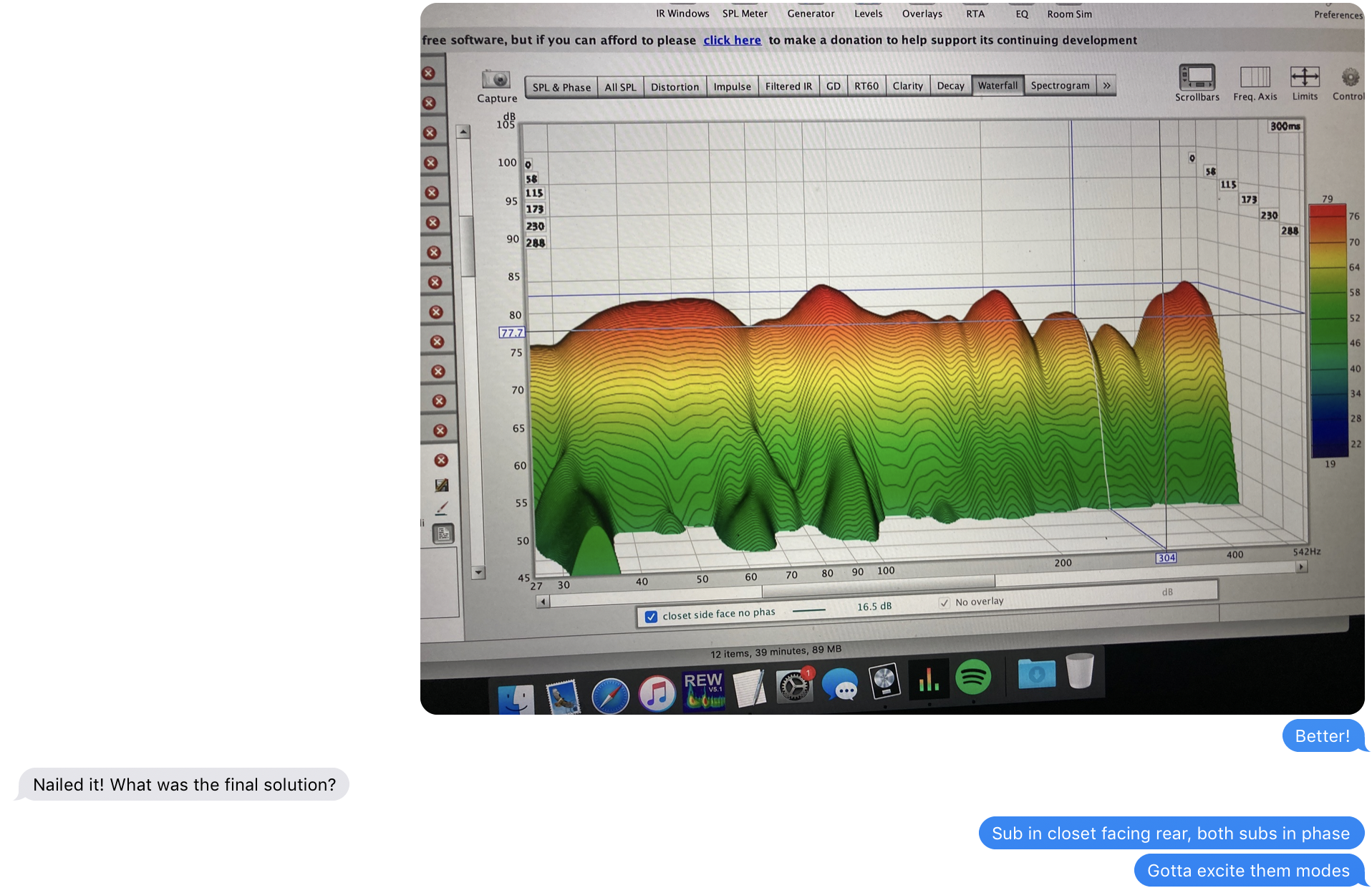 Voila! You can see that not only did it fill out that 72hz null nicely, it cleaned up some resonance/decay between 30-45hz and moved the bulk of it to below 40hz, which is good enough for my purposes. As you can see there was still work to be done above 200hz, which is where broadband acoustic treatment starts to come into play, but I was within +/- 2.5dB or so for 200hz and below, which is pretty good for an idiot like myself in a bedroom.

There's lots more to be found on the Earl Geddes subwoofer protocol and lots more work to be done with delay compensation and precise phase tuning and such if you really want to get into it, but you can do pretty good with two subs just via trial and error.

Pretty much what Dok said, you want to get the sub(s) positioned so that they're adding to your main speakers in the most helpful way.

You could maybe sort of roughly ballpark things by ear, but if you want to do it right you really have to do the REW test/repeat. REW is super helpful, everyone should have it.

An alternate way to do a quick check of your low freq response is to play sine waves (the default bass synth in REAPER works great) in a chromatic scale starting from like low B. If your room is perfect all the notes will be the same volume. In the more likely event that your room isn't perfect, some notes are going to be a lot louder/softer than others. Maybe A LOT louder. What this is showing you is where the peaks/nulls are in your room. If you haven't done this test, take 5 minutes and do it now, it's very illuminating.
www.oldcolonymastering.com
https://morespaceecho.bandcamp.com/
Top
Post Reply
7 posts • Page 1 of 1

Users browsing this forum: No registered users and 64 guests