a new gobo I just built

a new gobo I just built

I have 2 similar that I built awhile ago, but finally built one with a "Window", which is good for a singer or guitar player that has to give or take a visual queue. the frames are 1x6 (standard whitewood). For each panel I cut 3 x 24" wide pieces for top. bottom, and middle. The sides are the standard 6 ft length. I used some angle brackets on the inside to keep them relatively square. The "Window" is acrylic. I boxed in the window and then put clear caulk around the edges to seal. it's thin plastic so it's not going to do too much for sound proofing, but still better than air...

Inside the gobos have OC703 and in this case I also put a couple layers of old "Insulcot" (which is recycled cotton) and I recycled/repurposed it again - I took it out of an older gobo that I no longer use. The lower box is slightly larger than 2 sheets (2'x4'x2") of OC703. The window is 18"x24". Standard hinges to keep them together for folding up, and some old nylon strap to help me carry it out to my studio (it's a bit awkward to carry...) and some stick-on felt strips (furniture glides) on the bottom of each panel. One other trick, is I used some sheetrock screws on the inside of the larger box and then strung picture hanging wire between them so that it would give some support to the sound absorption material inside - sort of like a wire fence or mattress box spring - but only a few pieces of wire.

All parts from Lowe's except the OC703 and insulcot, but my Lowe's does sell Rockwool and that's what I had originally intended to use before deciding to repurpose the other gobo. Oh, and that's Walmart black bed sheet that I stapled (Arrow T50 stapler) across the guts. 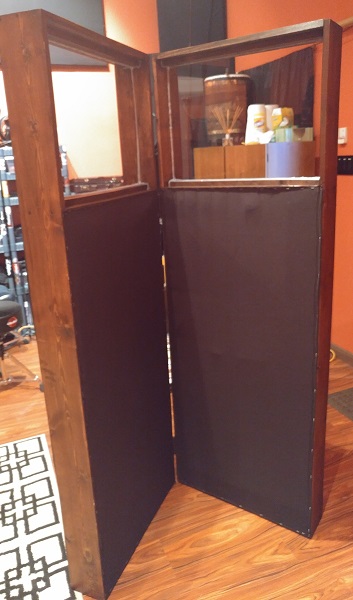 Re: a new gobo I just built

Tony - I probably should have posted this in "Creative Recording". Feel free to move if not too difficult.
Mike
www.studiodrumtracks.com -- Drum tracks starting at $50!
www.doubledogrecording.com
Top
Post Reply
2 posts • Page 1 of 1