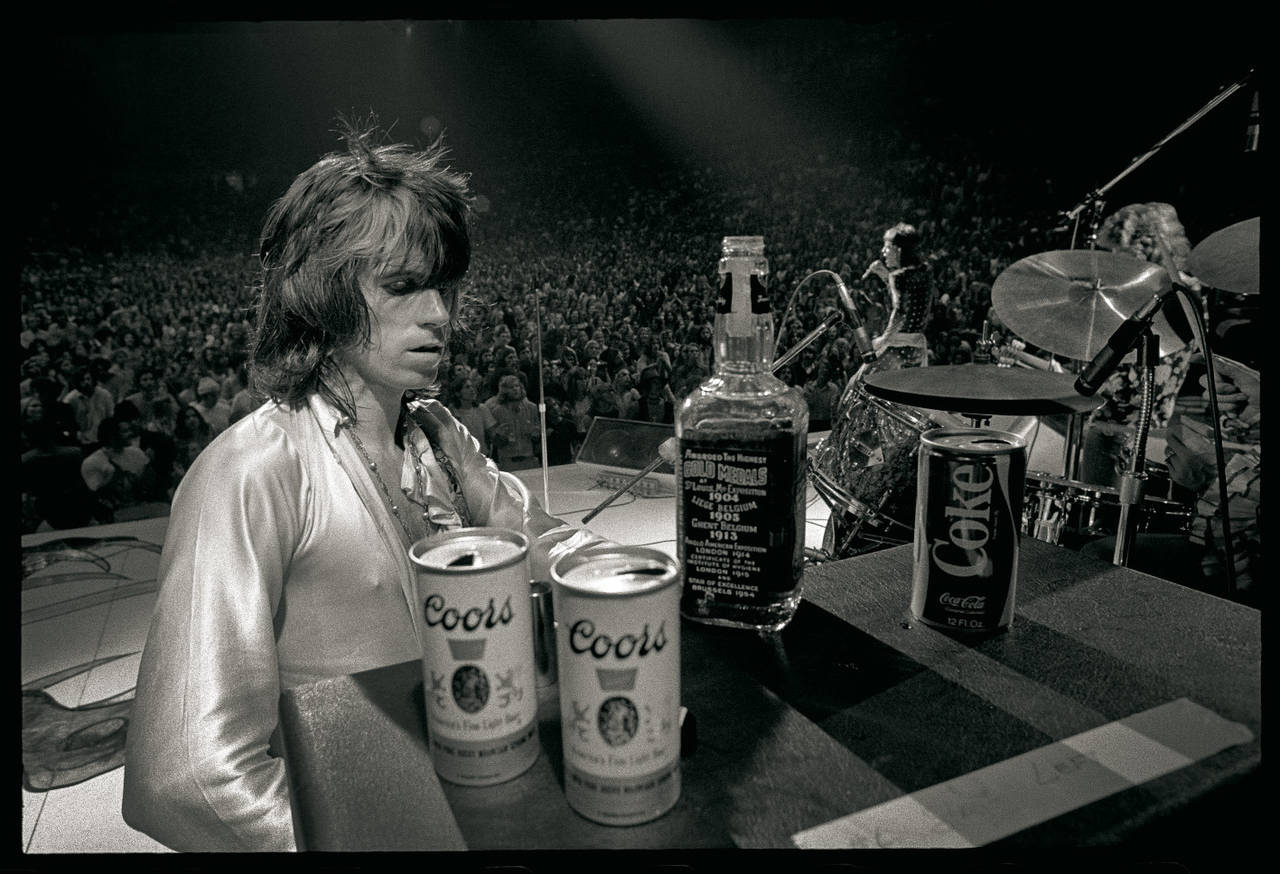 Wow, that was weird. i was trying to repair/replace a dead image from new years on a page further back in this thread and it posted as a new post. (operator error)
It's been a weird year, what can i say.
Here's another pic for your troubles. 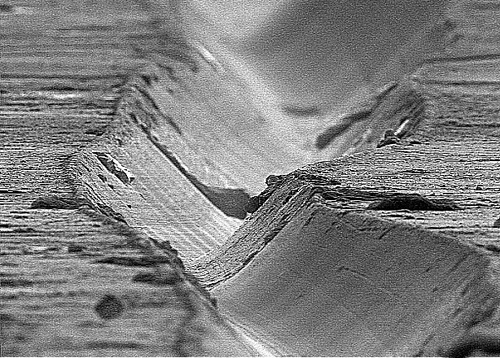 The other album pictured, Velvet Darkness: IIRC CTI released some practice tapes as his first solo album without his consent. The guy who owned this copy before me was either so disgusted by that that he never bothered to open it. Or he was a Holdsworth fanatic and was one of those collectors who buys a copy to play and a copy to um, fetishize and worship sealed and virginal for all time. I haven't opened it yet. There's something about a sealed several decade (44 years old actually ) old album that makes you want to leave it be. Guess I better get that player copy then. Doh!

Wiki:
"Holdsworth was a highly influential guitarist among advanced guitarists and was considered one of the most technically accomplished and most unusual players. According to Guitar World magazine he is "as influential as Chuck Berry, Jimi Hendrix and Eddie Van Halen".[59] Eddie Van Halen, Frank Zappa, Shawn Lane, Neal Schon and Gary Moore have proclaimed Holdsworth one of the most advanced guitarists of his time.[59]

However, Holdsworth remained "not well known outside musicians' circles",[59] and musically, even by guitarists, he was criticized for not being musical enough and being too technical for the average listener. Holdsworth himself understood that his music did not gel with the majority of people and said "I don't think everybody would like it, for sure. But if people got to hear it, if even 20% liked it, I would be really happy with that."[59] He once approached a major record label and was told by its producer that his music was "completely directionless," and how he did not approve of anything Holdsworth had ever done since he started making his own albums.[59] Guthrie Govan has said of guitarists who aspire to play like Holdsworth: "I think it's potentially dangerous when a rock type player hears a bit of Allan Holdsworth or Frank Gambale and then dives straight into that style of playing; not only is the technical aspect daunting, there's also all that musical knowledge and understanding going on behind the scenes, and it's really hard to absorb both of those aspects at once without your playing just starting to sound worse."

The Mrs. pointed out that the previous photo was kinda "gucha-gucha", Japanese for messy or unorganized. Fine. Here's a more straightforward shot. But see, the previous had a theme. Unopened media. There's a heavy-duty S-VHS tape for adat recorders, and a cube of 10 unopened TDK minidiscs, as well as an unopened bonus disc Japanese edition of Frank Black's second solo album Teenager of the Year.
So you get both.
(Plants vs Zombies We've opened and played a million times however..)

wow that really shrank will have to remedy later..

Burned up collections have been a thing around Norther California in recent years, but there is also flooding of the Russian River from time to time resulting in some soggy vinyl.

Early on getting back into vinyl store owner said "hey, you ever heard of Gentle Giant? No?" He walked over to the dollar bin, handed me a heavily water damaged copy of Glass House "Take this home. Thank me later" 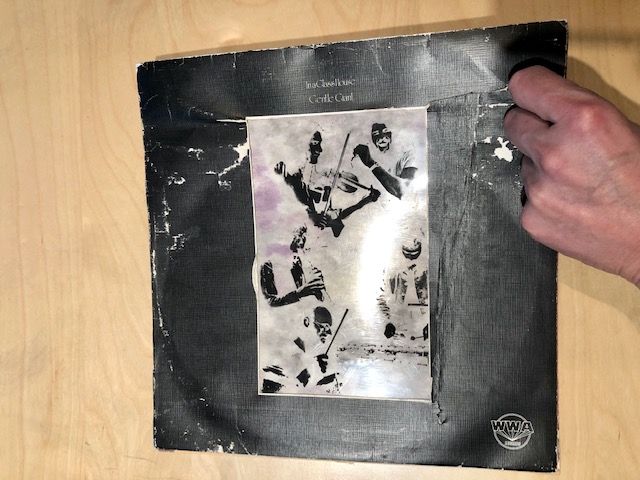 Months later, when I started entering my collection online I couldn't find a gatefold pressing of it on Discogs.
Upon closer inspection I found that the "gatefold" was actually the next album in someone's collection that when it dried had affixed itself to its neighbor.

The opening for that album was completely sealed, and the cardboard had hardened stiffly. I ran a knife blade down the seam and found that there was a copy of Gentle GIant "Acquiring the Taste" inside. BOnus! 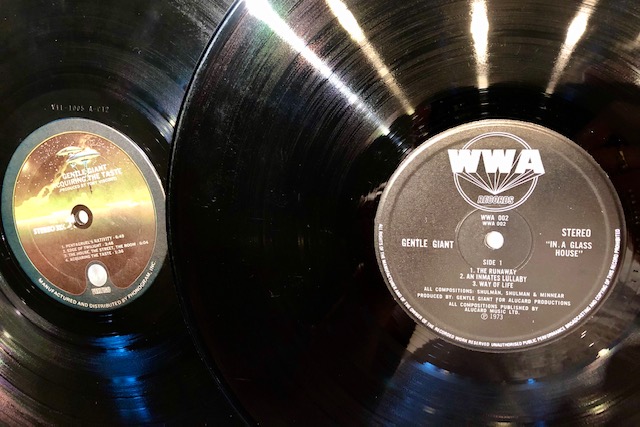 I liked what I heard! One of my fave bands to have on vinyl. Eventually I wanted better condition copies of both. Picked up copies of several of their remasters as well.

I picked up a water damaged circa 1975 re-issue of Milt Jackson/Coleman Hawkins Bean Bags for a buck last weekend. The vinyl looked hardly played if at all. Finger snappin' jazz, and I'm a sucker for well recorded vibes on vinyl. 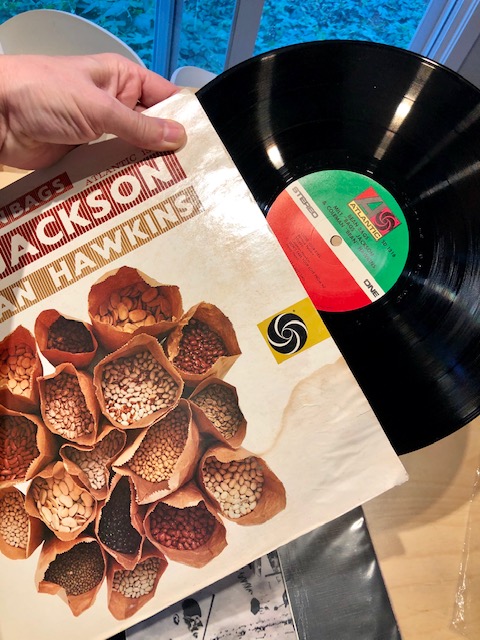 this is all I have left. but I'm pretty sure I had Nilsson Schmilsson and a couple Ventures records and now I'm pissed off because I don't know where they went! bottom left Sandy Nelson record was my dad's - and the Ventures records that I cannot find too. 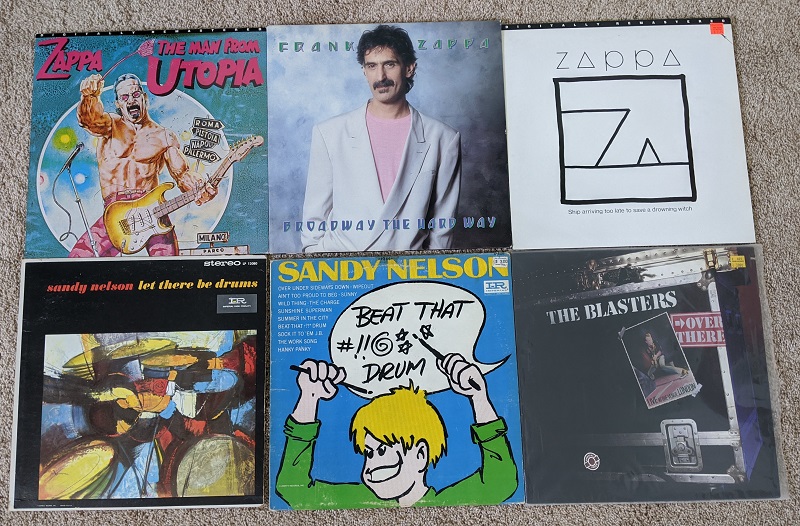 There are lots of ads on youtube now trying to get you to invest in blockchain support network companies. Correct me if I'm wrong or if there's been some new occurence in the industry, but if bitcoin banks can disappear from sight without a trace with your loot...?
There's a guy I work with who back in '90's bought 11k worth of stock in the same fruit company Forest Gump invested in, and now it's work 850k . Apple.
He's retiring this year.

I did not invest in startups like Amazon or Google, or that fruit company. But I did start collecting vinyl for the second time around in earnest early 2012. And while I didn't get into it as an investment, through no fault of my own a few of the titles have gone up in value.

On discogs, if you have your collection screen up and select Median Price sold for as the organizer, these albums all came up pretty much in the 80 to 100+ range for the particular pressing I happen to own. I don't recall paying anywhere near that for pretty much any of these. (Nor will I be retiring anytime soon based on my stash of vinyl artifacts, just fun to note.)

yeah my collection is worth 12k median and 20k maximum (both cassettes and vinyl). i have a couple records that are selling for 500 bucks a pop, i paid 20-30 dollars for them bought new. it's wild. that's why i'm so into cassettes now though, they are actually affordable.
Top

The Aesthetics of Remastering Reissues

May 2018 interview of three mastering engineers from a great recording site and bi-monthly magazine you may have heard of.

And now for your viewing endurement an album review this one
You'll note I've painstakingly researched the album discussed and applied only the highest production values to this video review in order to bring you such wide ranging in-depth information encapsulated within such an expansive 15 second segment.

shedshrine wrote: ↑
Fri Jan 08, 2021 1:03 pm
And now for your viewing endurement an album review this one
You'll note I've painstakingly researched the album discussed and applied only the highest production values to this video review in order to bring you such wide ranging in-depth information encapsulated within such an expansive 15 second segment.