A y-cable like you've made is fine for splitting an output, but it's a bad idea to use one for summing outputs.
A basic summing matrix uses three resistors of the same value joined in a Y shape. The two top points are the inputs, the center of the Y is the output, and the bottom point is ground. 10Kohm is probably a good value to try.


Here is my Telefunken Jubilate. I've read that these were often sent/brought home by u.s. troops stationed in West Germany. It has one 4x6 speaker, an extension jack, and two DIN connectors labelled "tape recorder" and "pickup" which are accessed by pressing two of the selector switches at once. This one also still has the schematic in a Telefunken envelope, tucked into the bottom of the chassis. It's ill at the moment - I used it for several years without problem until I foolishly put it in an un-air-conditioned shop one summer and some of the old waxy foil caps went bad. I really should put it on the bench sometime as it's the best sounding tube radio I've had.
Village Idiot.
Top

Ha! I've got a little 1960ish export model Telefunken Gavotte 5353w. American car grill influence. Now that one has bigger inputs, like a MIDI cable sized. In fact, I've got a custom RCA to MIDI cable working fine for that one, actually a shop configured it for me when I had it gone over. Agreed, pretty amazing the full sound these put out. 4x6 in front, tweeters on each side. Have you messed around with the shortwave channel? Pick up some europop from the continent why dont' ya. There's an extension speaker out in the back (again with a custom connection of some bygone era). I wonder if that input would bypass the existing speakers or run both. 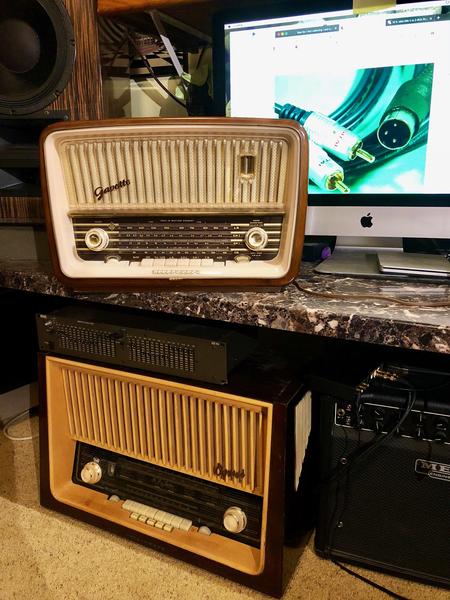 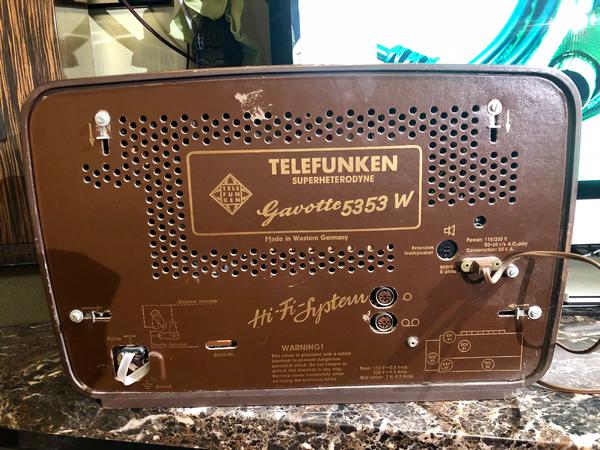 There's what I guess is a mono input (1 reel image) and a stereo input? or a second reel to reel? (2 reels image) . The cable works with the mono input. 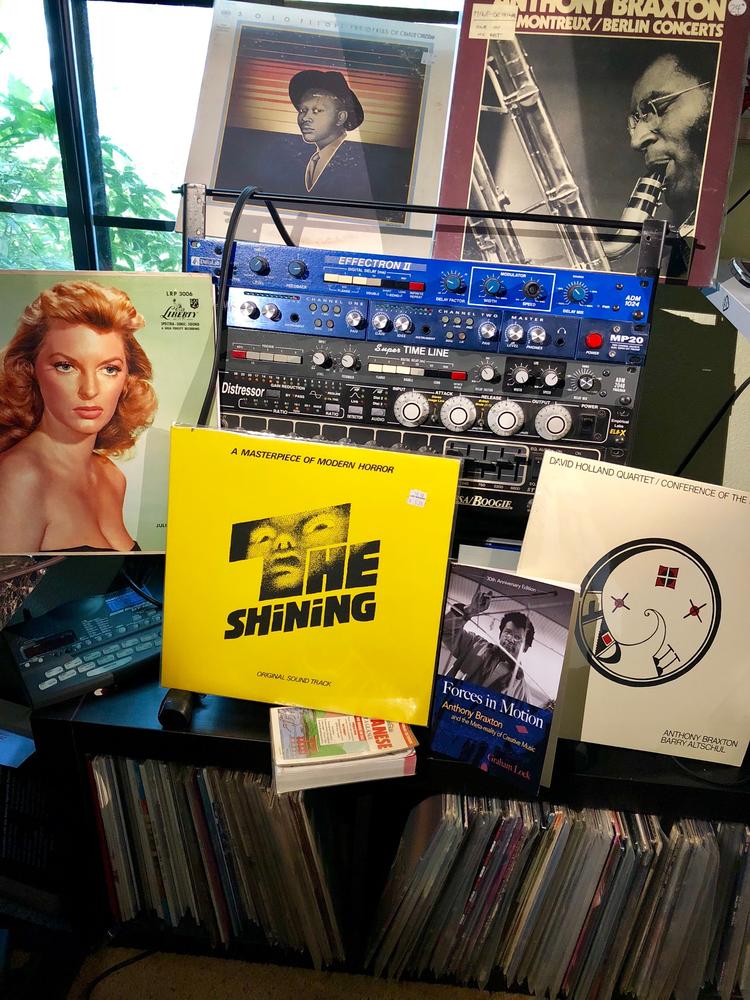 Solo Flight - The Genius Of Charlie Christian 2xlp compilation:
"Charlie Christian, with his hornlike, single-note style, which capitalized on innovations in amplification technology, revolutionized, redefined and elevated the guitar as a lead instrument on par with the saxophone and trumpet in jazz and popular music."

Julie London-Julie Is Her Name Who needs incredible vocal range when you can bring wood with whispery phrasing?

David Hollond Quartet-Conference of the Birds
1973. "It is jazz bassist Holland's second collaboration with composer and saxophonist Anthony Braxton. The liner notes describe how birds would congregate each morning outside Holland's London apartment and join with one another in song.

Each piece on the album is "open form," with a theme stated at the beginning to set key, tempo, and mood. The players are then free to improvise in whatever direction they choose. Stuart Nicholson writes: "Conference of the Birds emerged as a definitive statement of swinging free expression. It was, in essence, a return to the rugged discipline of early 1960s free improvising by working off melodic foundations using the 'time, no changes' principle to achieve greater control over that elusive quarry, freedom."

Anthony Braxton-Montreaux/Berlin Concerts Double lp from the man who names songs with diagrams and equations.

Anthony Braxton-Forces in Motion (book) Insights into Sun Ra and Mr Braxton's world. I'm only a third of the way through it..

The Shining- Original Soundtrack. Great collection of avante garde "scary" music pieces. Bought it for $6 in 2012. Seems to be going for much more now..
On Wiki: "The soundtrack album on LP was withdrawn due to problems with licensing of the music. It remains only available on vinyl (there has never been a CD release) and is difficult to find." 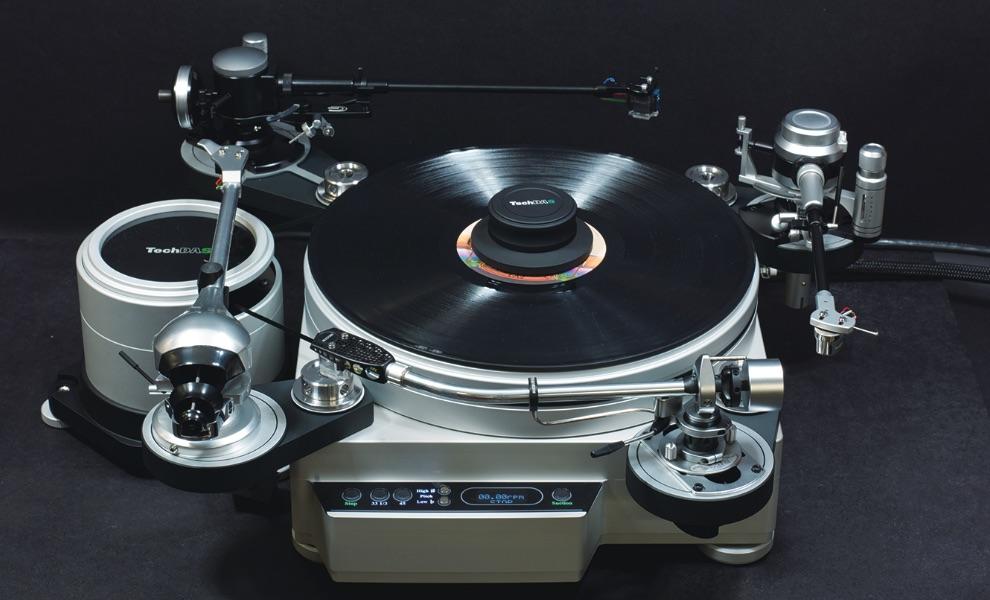 □ Has the core air control technologies transmitted from the Air Force One.
● Air bearing that lifts up the platter to 30μm
● Vacuum hold-down of the disk
● Decoupling of the disc with air injection

i had a friend that went to the wesleyn music school where braxton teaches. he said the dude was super out there. he came into class one day and said he's discovered a new artist that he thought could be a major force...............Bob Dylan. no joke. best story he told me was AB wrote this super hard piece of music for the band and it was like a new time signature every measure that was super complex and difficult. and he went up to him after a week or so of trying to get it and told him he was having trouble with it and couldn't play it. AB replied "oh i'm not trying to get it to sound like that actually being played correctly, i want it to sound like everyone trying to play it but they can't", my friend was like this dude is an ass hole.
Top

After reading what I have thus far into his book I can totally see him giving assignments like that. He’s definitely got his own thing going.

markjazzbassist wrote: ↑
Mon Jul 30, 2018 7:39 am
i had a friend that went to the wesleyn music school where braxton teaches. he said the dude was super out there. he came into class one day and said he's discovered a new artist that he thought could be a major force...............Bob Dylan. no joke. best story he told me was AB wrote this super hard piece of music for the band and it was like a new time signature every measure that was super complex and difficult. and he went up to him after a week or so of trying to get it and told him he was having trouble with it and couldn't play it. AB replied "oh i'm not trying to get it to sound like that actually being played correctly, i want it to sound like everyone trying to play it but they can't", my friend was like this dude is an ass hole.

As a teacher, I can say that I find that story both beautiful, and horrific.

You started this thread SIX YEARS AGO!

It’s funny, 2012, started talking about it at work with other music freaks, this whole revisiting of records. Then started reading about its “revival” here and there online, in the papers, in magazines.
Geez, now it’s a full blown renaissance. Online radio stations that tout the “vinyl experience” and play (digital dubs) of vinyl. turntables being made again, (with upgrade packages!), modern record pressing machines are being designed and built for all the new record plants popping up worldwide, Utube vids on vinyl are now polished affairs with picture in picture and subtitles and voice of God voiceovers.. The local record store owners can actually buy first hand clothes again, dogs and cats...living together...mass hysteria.
Last edited by shedshrine on Fri Aug 03, 2018 9:08 pm, edited 1 time in total.

Did I ever mention that I also collect Tinky Winky approved Japanese canned coffee?

the vinyl renaissance is awesome. i inherited my parents record collection, stereo, speakers, etc. got my in-laws when i got married. i got great stuff

i'll never forget i was on tour and played this infamous dive in lincoln nebraska called knickerbockers. next to it was a record store, i did the usual and was in there. at the time i had both LP's and CD's, and the guy was talking to me about what i had. he said "look vinyl is superior, how about this, i play any record you want on vinyl then cd, you decide". he did a Hendrix head to head and it was evident, the vinyl just sounded better. when i got home from that tour i took my entire CD collection to amoeba music in hollywood, they gave me 500 in store credit which i used to basically get most of that stuff back on vinyl. i'm vinyl only since then and loving it.
Top 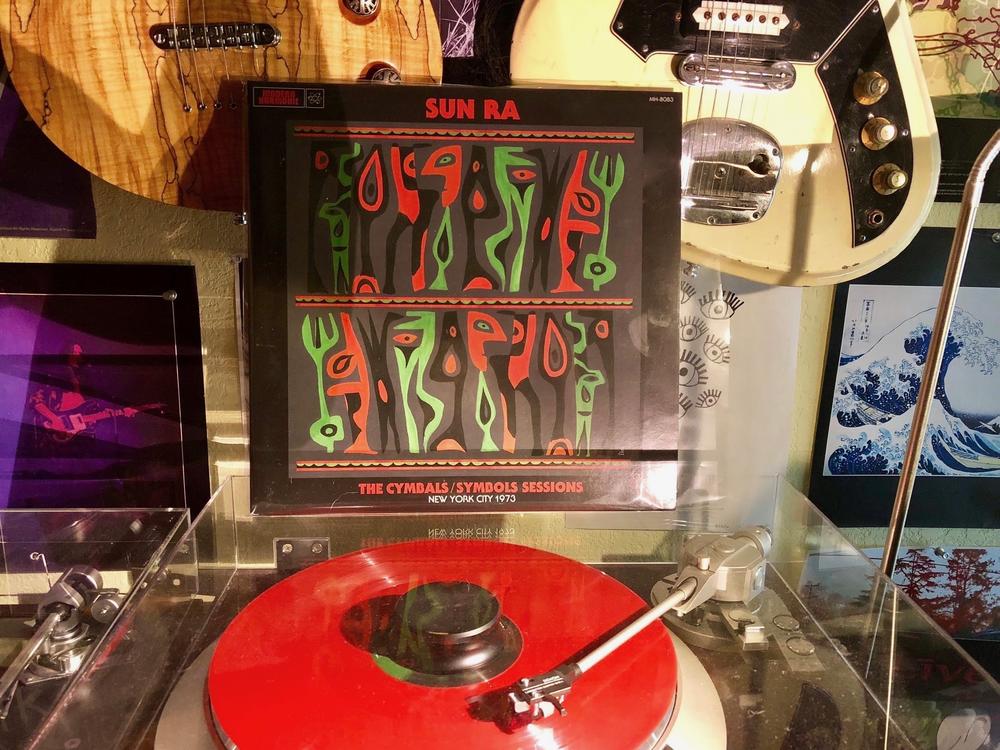 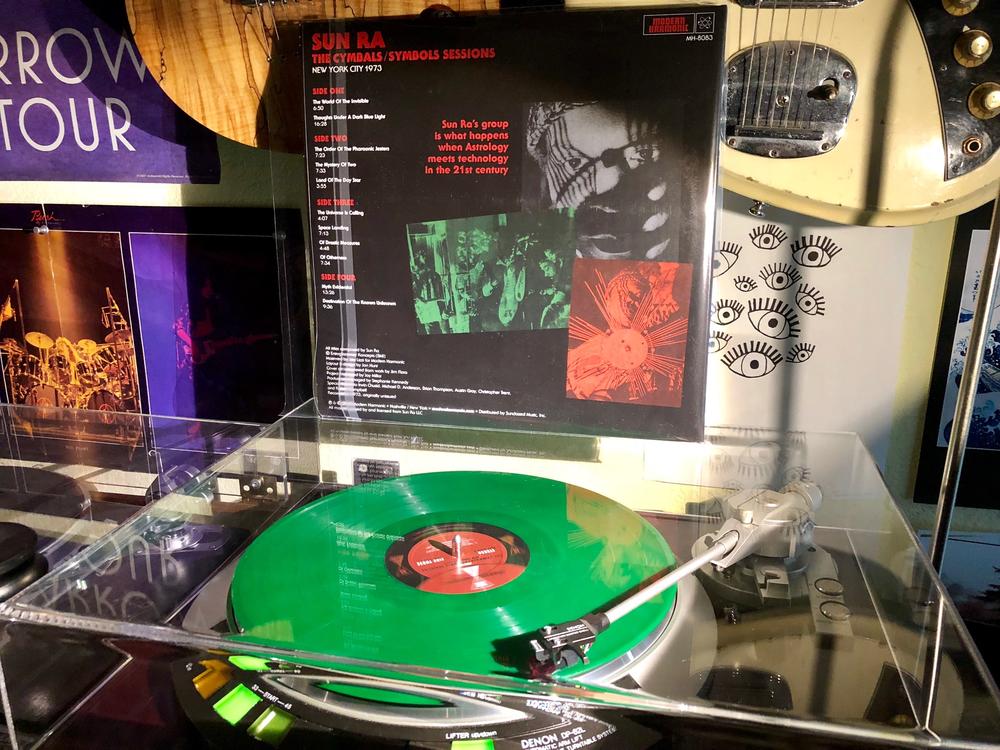 In other news, received a Schiit Audio Loki, a little four band eq.
"Instead of a stack of noisy op-amps attached to open-frame, dust-collecting sliders (like EQs you may have used in the past), Loki uses a single, discrete, current-feedback gain stage, coupled to passive LC filters for 3 bands, plus a gyrator for the bass. It also uses sealed Alps potentiometers with rational adjustment ranges to allow for fine control. Coupled with a 100% passive bypass setting, Loki offers the transparency and flexibility you need."
for $150 I am finding it an awfully fun/useful toy with these radios, Eventually my dream is to patch it through a Rogue Audio RP5. That is if I can ever afford a Rogue Audio RP5. 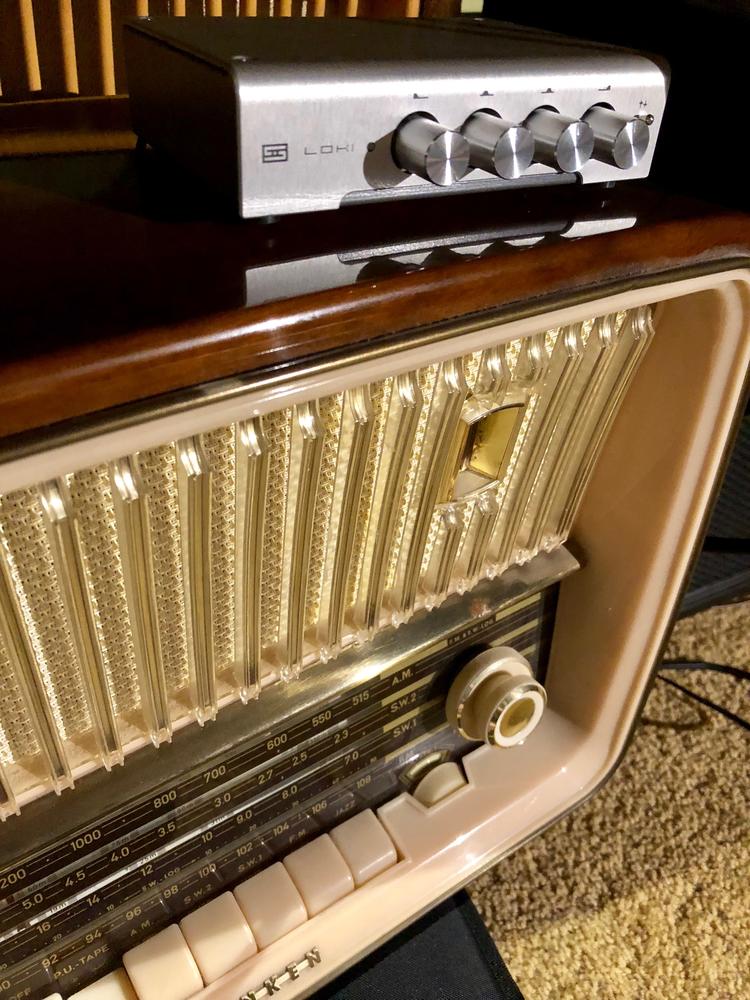 What happens when you forgot your phone and don't get to check for reviews and ratings, and just grab a few because they looked promising and were cheap.. 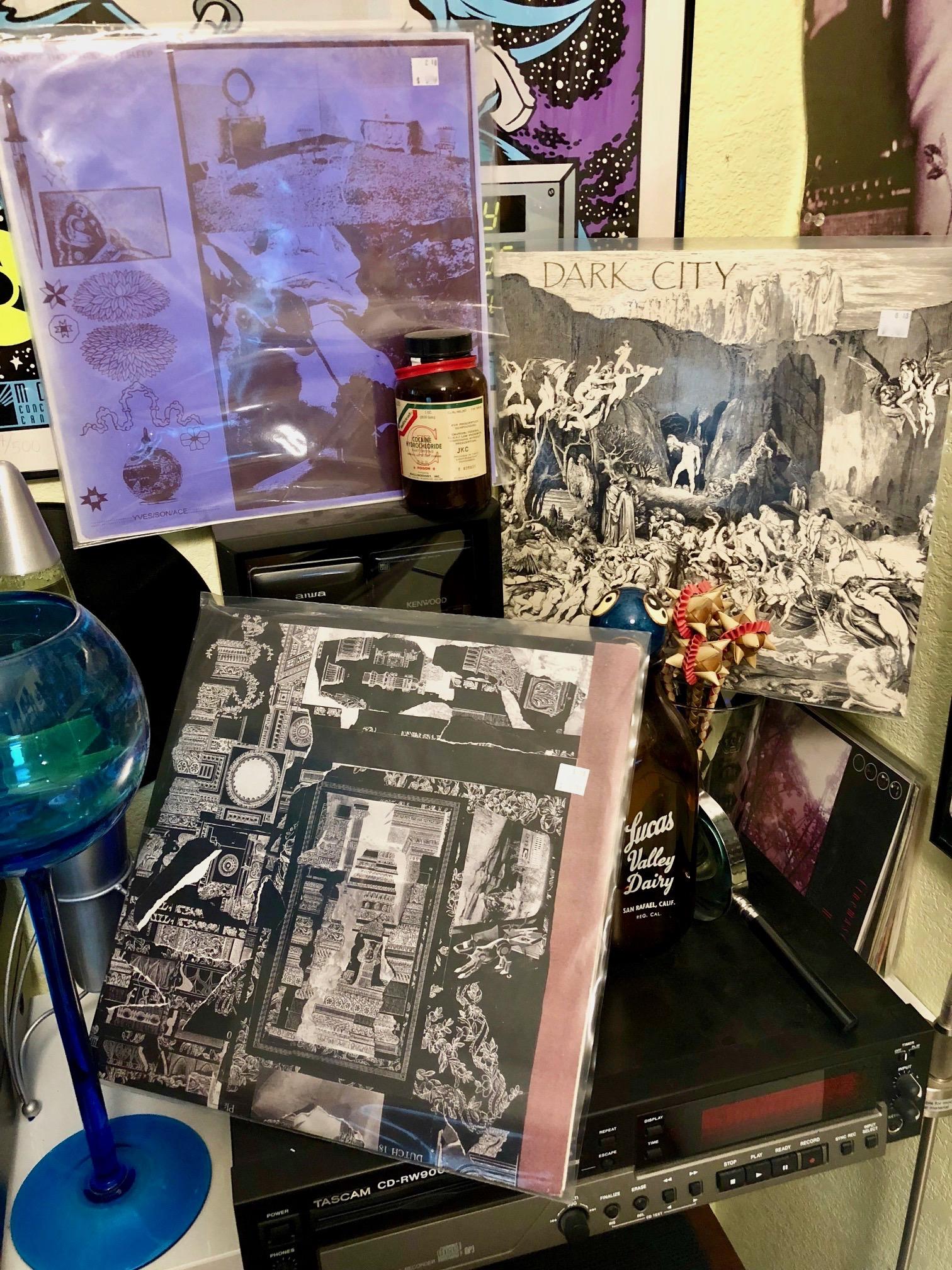 Double Clicky for the grande picture.

Yves/Son/Ace ‎– Parade Of Thoughts/Can't Sleep (top, blue)
2009 lo-fi experimental wtf electronic "songs" with a do it yourself aesthetic at three in the morning vibe topped with rolled off distorted spaced out Damo Suzuki vox. You may hate this or find it works for when you are there. Clear vinyl

Dark City-Baby Faze Records, San Francisco scene comp: 1991
"This Album is the Product of Mere Frustration Allowed to Fester in the San Francisco Microenvironment from 1987 to 1990" alternatively Alternative (in '87 to '90?), New Wave, or Goth Rockish. Tracks by Into Decline, Broken Toys, Threnody and Stickdog." Not a bad comp.

Hausu-Total 2013 Post-Punk, Art Rock, Hardcore. Cure-ish to screamo vox meet Sonic Youth/fugazi/ iceage/women, their own thing etc. Still kind of primordial in their efforts or maybe I just wasn't getting it, found myself pulling for them regardless. Couple stronger songs on second side. 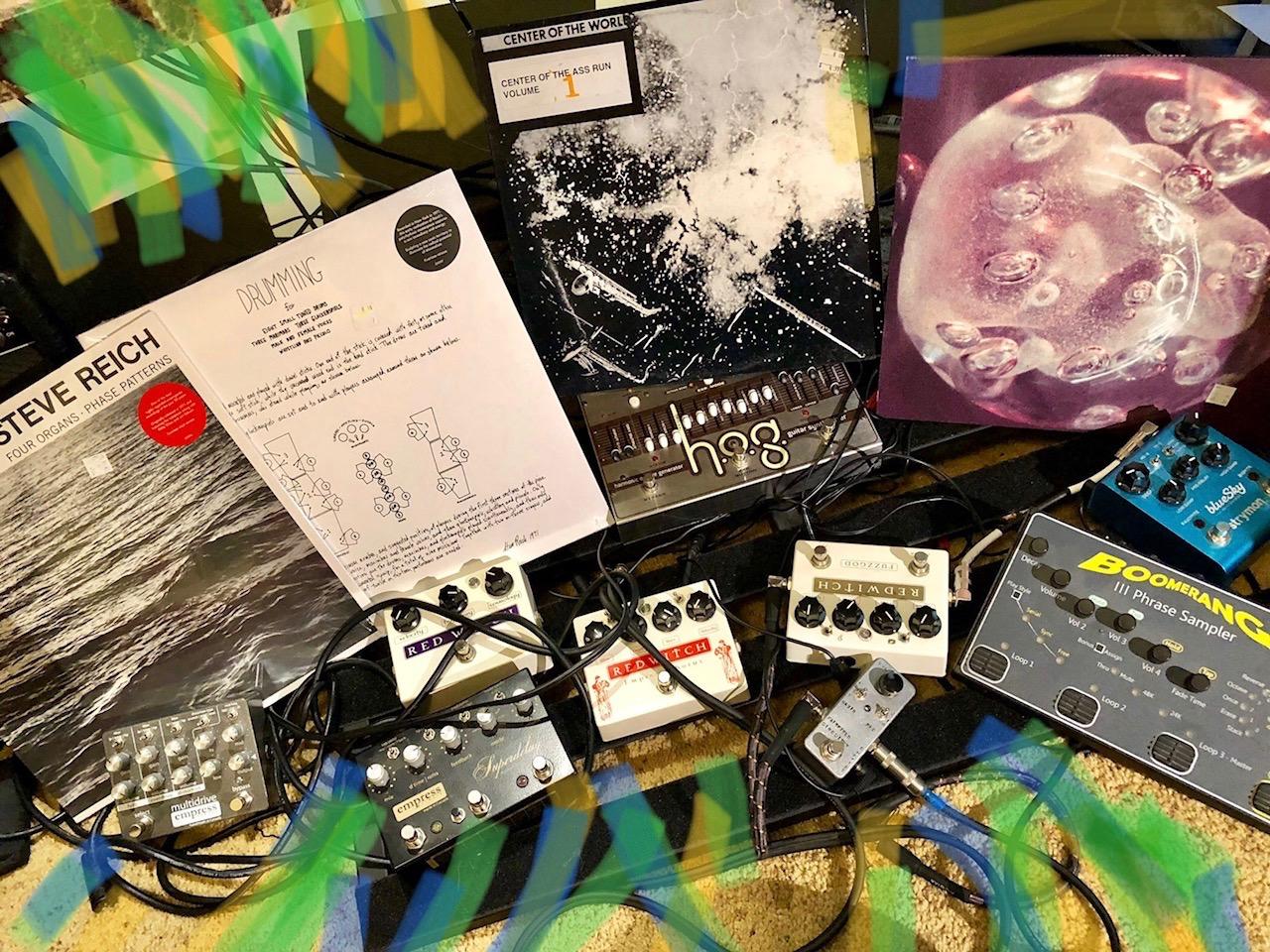 used
'Ecstatic Yod Presents Another Deep Putt Through The Ass-Center Of Known Sound-As-Thought' .
Side one, "Buddy=Dik" is a loop of (presumably surreptitiously recorded) Buddy Rich cussing out his backing band on his tourbus while the Hot Clam Combo back it with noisy clam ridden counterpoint.

Side two: Ecstatic Frank Ensemble plays "A liver supreme" starting off as a chant of John Coltrane's album title subverted with bombast behind it including trumpet, harmonica and hunting horn along with the usual suspects, until eventually a guy starts ranting about some guys liver, a supreme liver, I believe due to its ability to withstand years of alcohol abuse. Montague, MA 1996

$5 well spent. I even deemed it worthy of a nice poly line paper sleeve. The mark of acceptance into the collection.

Darkside-Psychic-2013 electronic downtempo double lp. Bonus that the previous (first?) owner had not redeemed the 320mb mp4 download coupon. thanks. Only heard the first lp, not sure if it's adventurous to keep as yet, will have to give it another go. 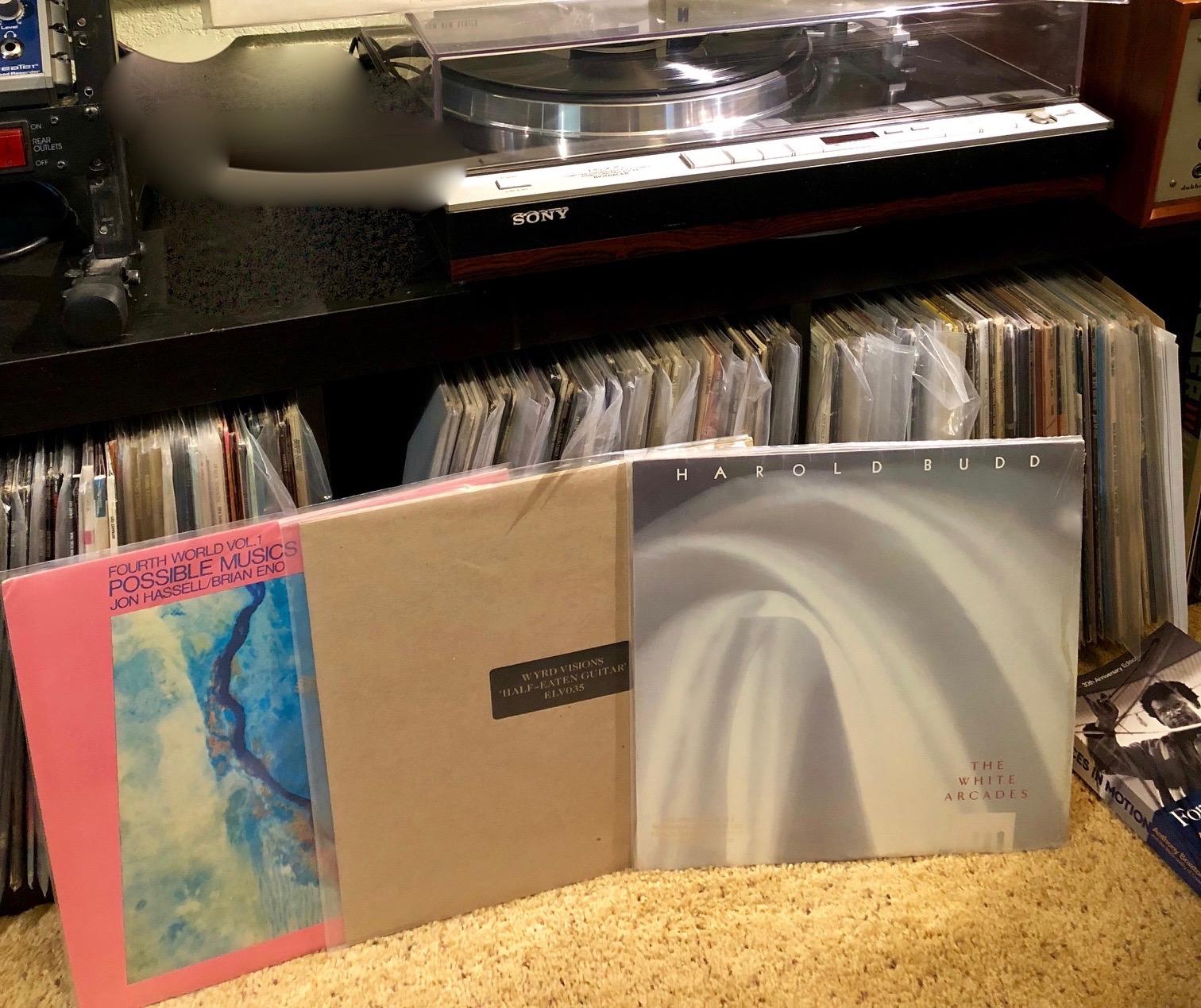 John Hassell/Brian Eno-Possible Musics.
Eno-treated trumpet makes it otherworldly.
from discogs:
"World music term has been applied in so many contexts that it has no meaning. This record is speaks on lots of levels. It is a fabric of multiple patterns and textures. It is warm, haunting, and searching at the same time. Electronically processes instruments still have human feeling associated with them. Eno's ambient stuff can be more for a particular moment. This is more something that can be played regularly."

Harold Budd-The White Arcades
Skims the edges of new agey, but the treatments keep it interesting. There's actually a version on utube where somebody slowed the whole thing down 800 times and that's actually pretty cool as well.