OK this is going to be an epic. TL;DR: I built a new studio. It flooded. I had to take it all down and build it again. Scroll like crazy to get to happy ending pretty pix.

So at the end of 2016, I left my beloved loft space in Boston after 16 years, and me and ms mse bought a house out in the country in Rhode Island. This was my old room at the loft: 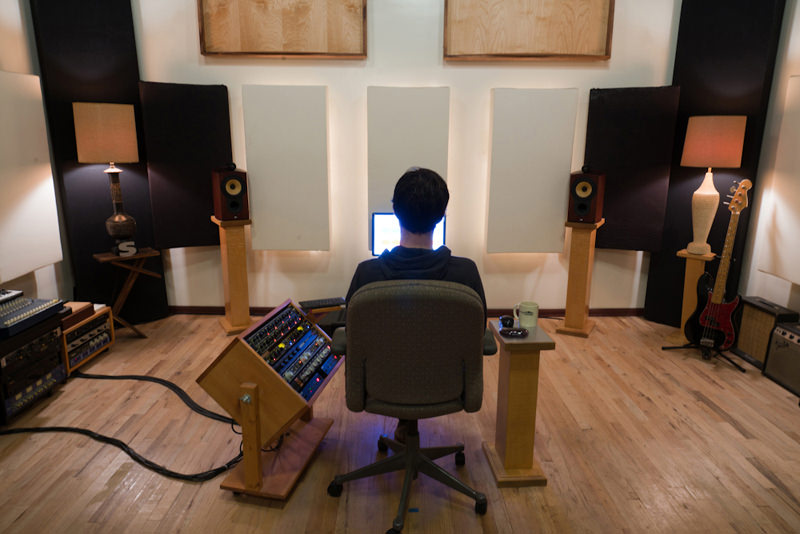 It sounded good and I mastered a ton of records in there, but I was ready for something bigger and better. We found a nice house with a 600sf workshop attached to the back of the garage. This is what it looked like when we first saw the house: 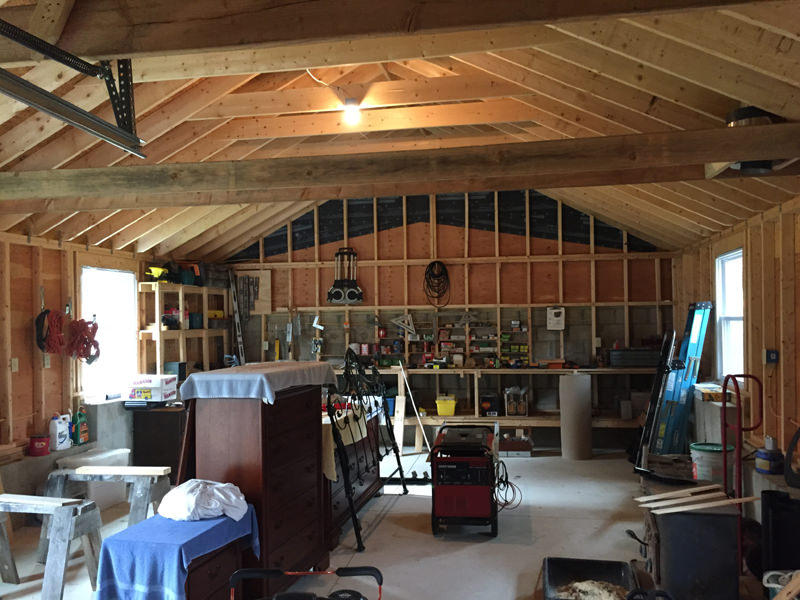 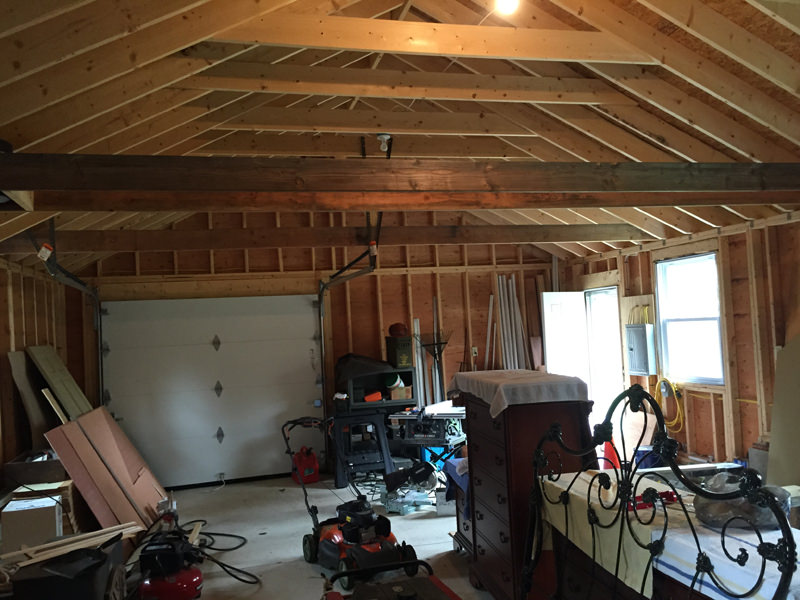 I was like yep, that'll do. I thought "this is going to be easy". Hahahahahahahaa poor stupid morespace.

We moved in right at the start of 2017. After getting the house somewhat organized, the first order of business was a ms mse-sized stack of drywall: 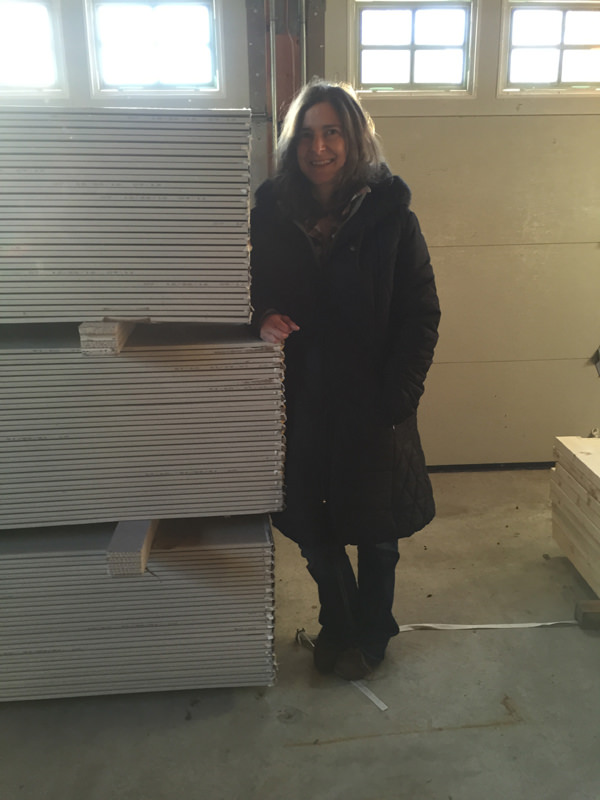 After doing the first bit of drywall, and trying to figure out how I was going to do the ceiling, I quickly realized that I was gonna need the big rolling ladder I'd left up at the loft in Boston. So I rented a lil Uhaul, and drove up and back in a torrential rainstorm to retrieve my baby:

When I got back to the house, it was still pouring and there was water coming in the studio. Shit! I quickly got really good at shoveling water out the door.

There were no gutters on the building, so I had those installed and naively thought that'd take care of it. Things were fine until April when it flooded again. So I had guys come and install french drains all around the outside of the building. Big unplanned expense but whatareyagonnado?

So then I figured I was good. Basic drywalling was done: 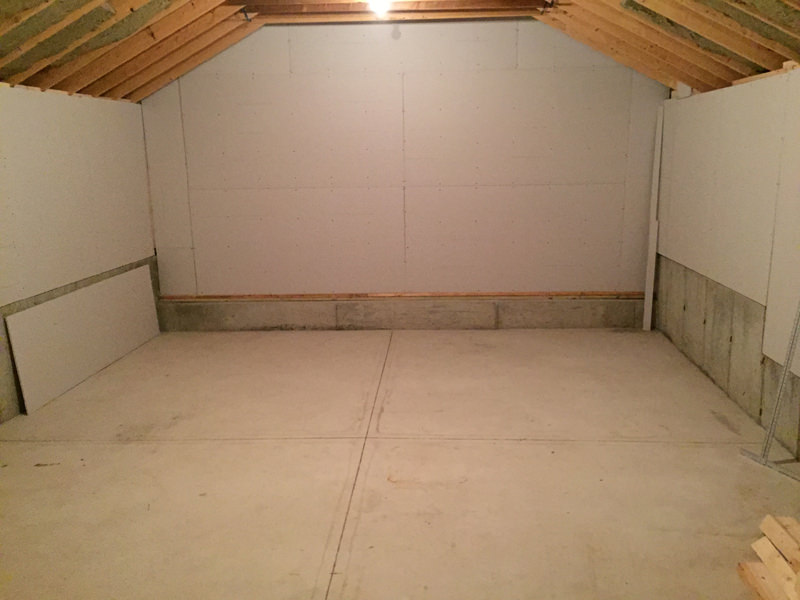 With the room like that the reverb was amazing. Totally bonkers. Good times.

So work continued over the summer. Doing the ceiling took forever. And it was calamity in there for awhile: 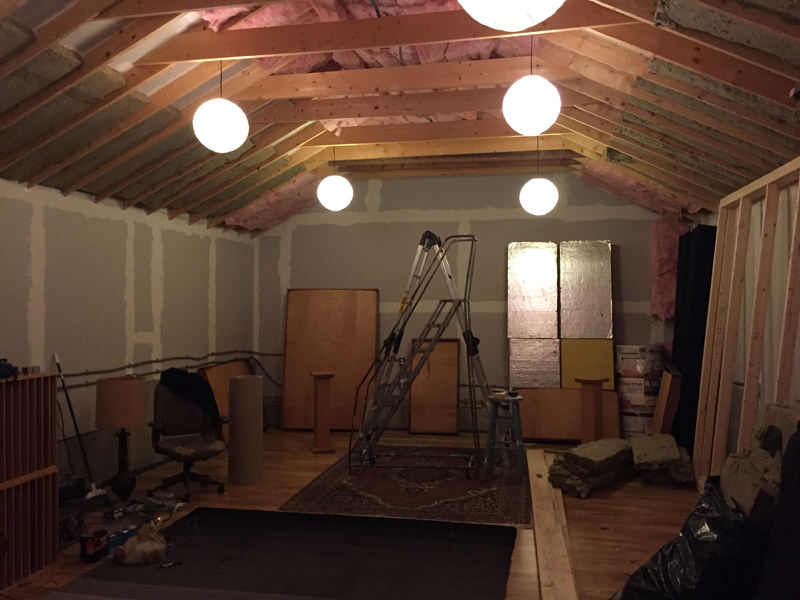 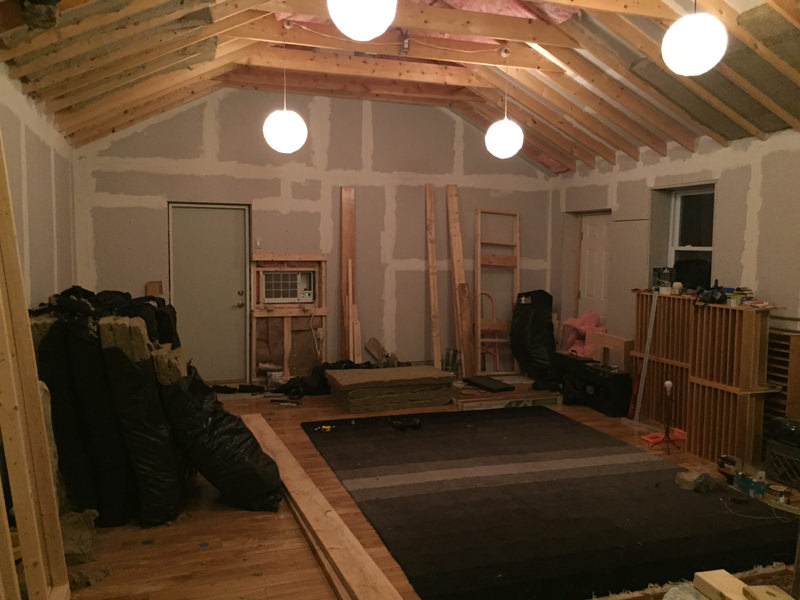 But I was getting there. My plan for the front and back of the room, as well as a good bit of the ceiling, was massive amounts of pink fluffy: 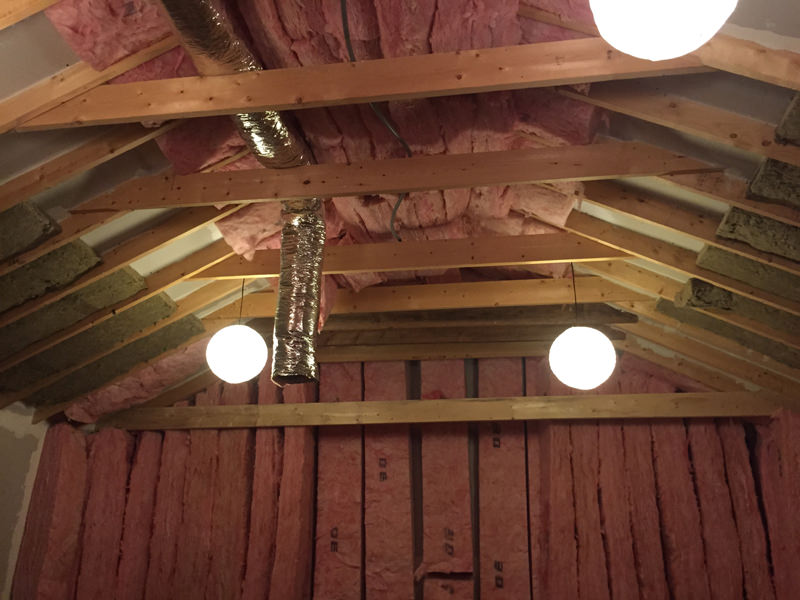 By fall I was finally able to do a test run: 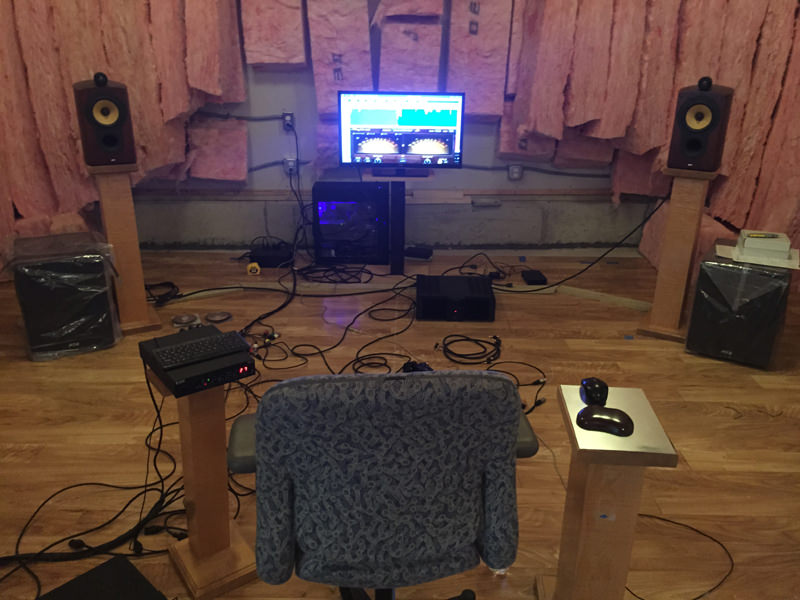 Results were encouraging. I started doing a ton of REW tests and experimenting with 703 panels behind the monitors: 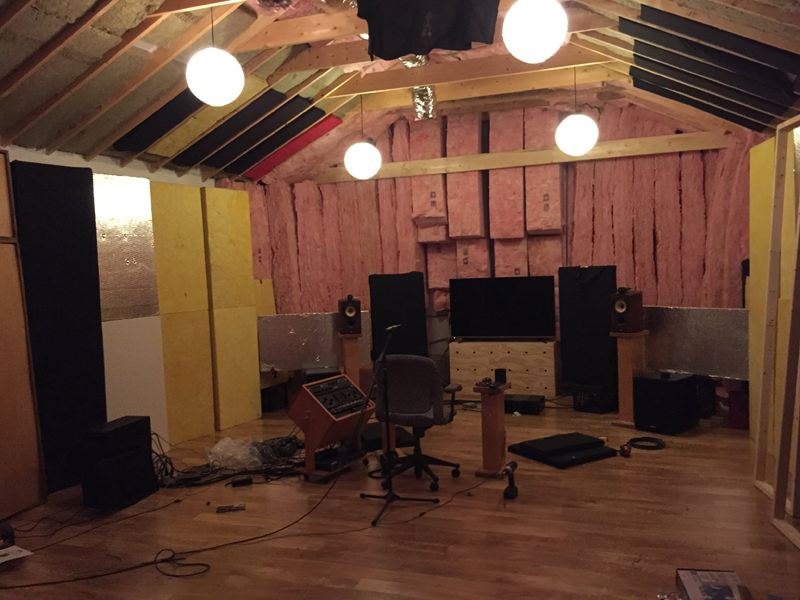 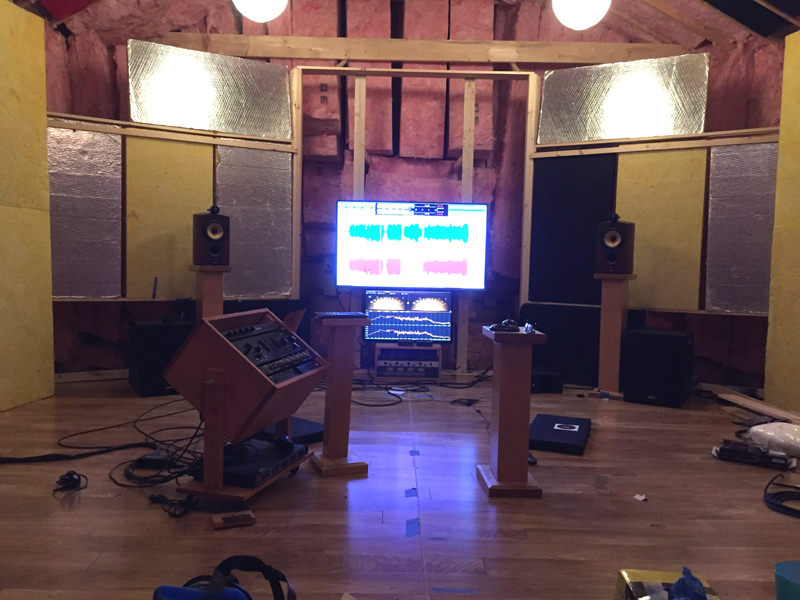 And then I got really busy and stayed that way through the end of the year, so the room was looking like a cleaned up version of that last pic for awhile. I wasn't happy about that, but it sounded really really good in there, and I was delighted about that!

So come the new year I was slowly getting around to getting the fabric together: 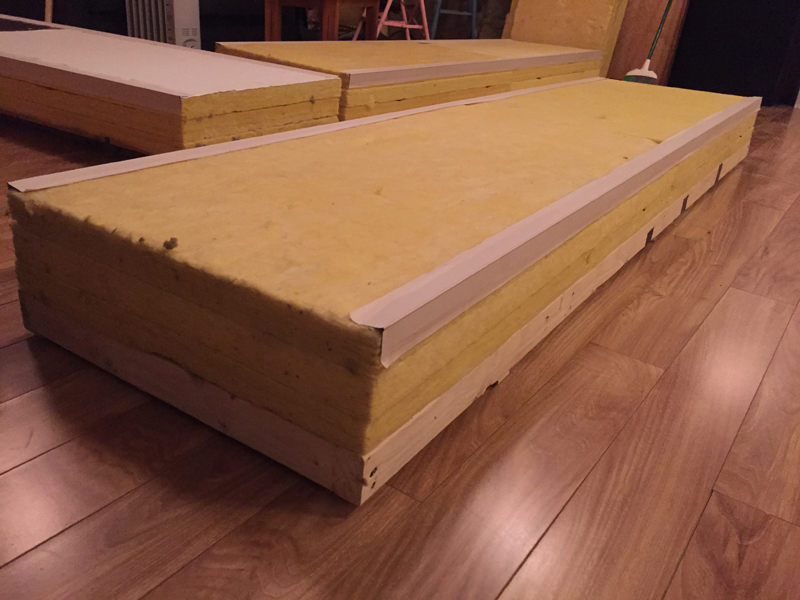 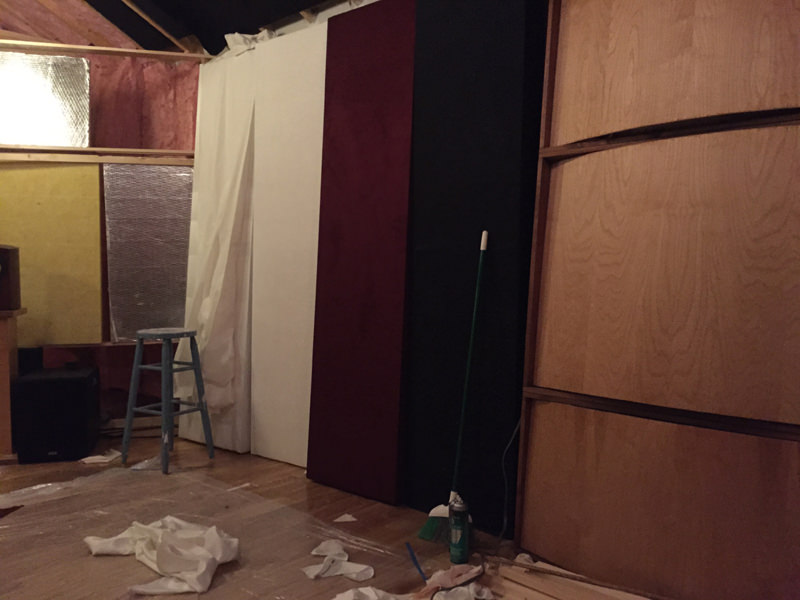 Then in the middle of February, we had a week of rain, which culminated in a particularly rainy Sunday, and my worst fears came true when water started coming in the building again. I was on top of it and had a wet vac on it immediately so nothing got ruined but.....shit. This was very much Not Good.

We'd had a a crazy rainstorm back in October and the studio had been 100% fine, so I had assumed I was safe. I didn't know WTF was going on now.

So I did some digging, literally, and found a crack in one of the foundation walls. "This must be the whole problem" I naively thought. I called a Crack Guy, and we set up an appt for the first Friday in March.

That week, the forecast for Friday is looking grim. Big storm on the way. Crack Guy and I agree to reschedule. Day before the storm, it's looking like we're getting all rain, no snow. I'm like...there's no way this is going to be good, so I moved all the gear out of the studio ahead of time.

It started raining about 11:00 Thursday night. From my experiences after we'd first moved in, I knew it'd take 12 hours before the studio would flood, but, being paranoid (with good reason!), I stayed up all night anyway and went out once an hour to check it.

Right on schedule, about 11:30 Friday morning, water started coming in. And there I was again with the wet vac. I was expecting a marathon so I'd bought a second one the day before so I could rotate them and not burn out the motors. Wise purchase there!

Long story short, I was out there until 7:30 saturday morning. It just wouldn't stop.

Manning the wet vac is a rather simple job, except for the fact that you need to empty it. And you can't carry a 3/4 full bucket of water by yourself without spilling it everywhere, so you drag it. Which again was simple work the first few times. After 20 hours of it though (and at the height of the storm it was getting emptied every 5 minutes), I was ruined. My right knee was screaming in pain so acute it was like a laser, I could barely walk and I couldn't come close to standing up straight.

So when the water finally subsided and I could go back in the house at long last, it took me like 2 minutes to walk 45 steps. No joke. If anyone had seen me hobbling across the yard I would've looked like the most broken man ever. But I was actually in pretty good spirits because at least It Was Over.

I took the longest, hottest shower in history, poured a rather sizable glass of bourbon (maybe two), then slept for 10 hours straight.

So after that came a long, slow, painful, expensive process.

The floor was the only thing that got ruined (besides my psyche), so all that had to go. I had to take everything out of the studio, the garage was filled with comically huge piles of pink fluffy, it was ridiculous. Everything else got crammed in the sunroom in the house for a makeshift studio.

And so it was 3 months of waiting on contractors and writing checks with one too many zeros. My Crack Guy came and fixed every crack he could find, sealed up the wall/floor joints, the expansion joints, and put two coats of some commercial-grade sealer on the whole floor. I had another guy come and put a sump pit in the back. I was annoyed to lose a little bit of basstrapping space, but it seemed a reasonable trade off!

And over the course of all this, talking to the various guys, the consensus was that the guys who'd put in my exterior french drains last year had totally botched the job. The drains were too high and they basically weren't doing anything. It turned out that one of my neighbors was an excavator, so I had him come and redo the whole thing, which even with the Friendly Neighbor Discount was Frighteningly Expensive. But he did an awesome job and got the drains down by the footers where they're supposed to be, and regraded the yard around the building so all the storm water runs away from the building like it's supposed to.

In the process of digging everything out, he dug up a safe: 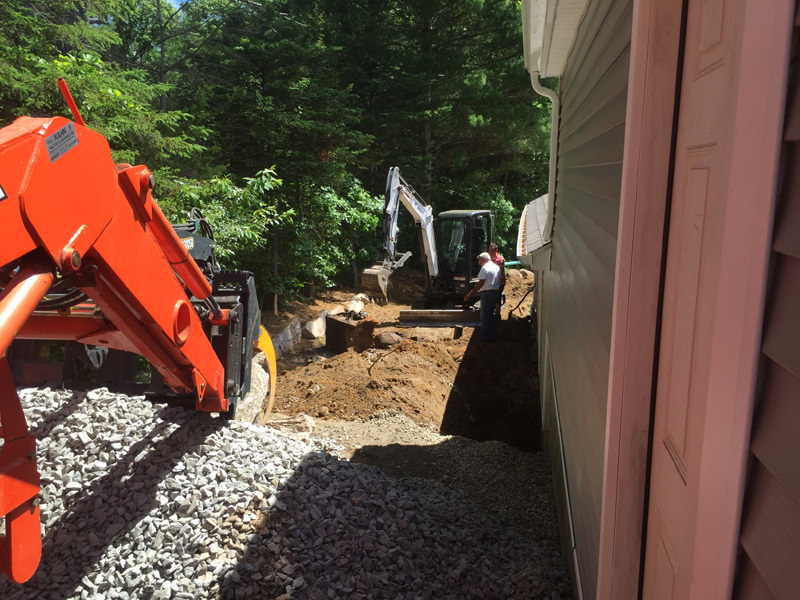 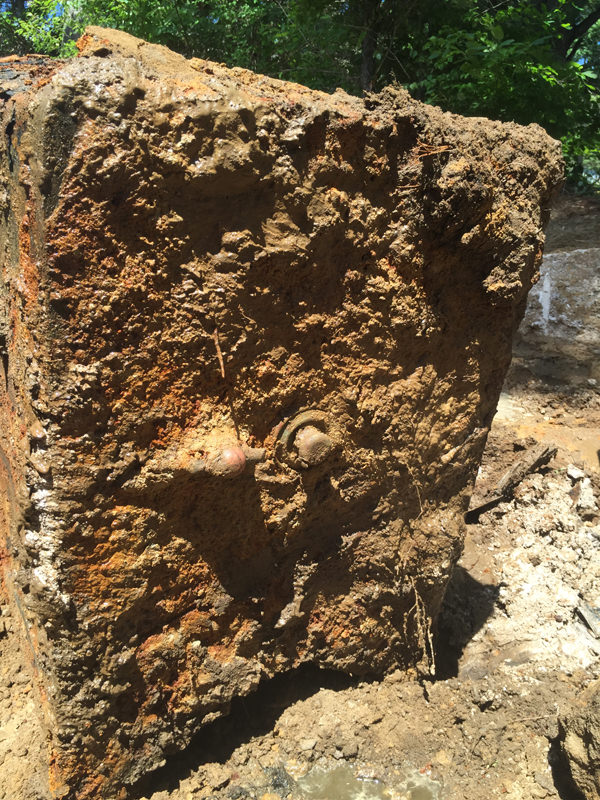 Unfortunately, much like the music business, there was no money in it.

So after all of that was done I could finally start putting things back together again.

The second floor went in MUCH easier than the first floor, so that was nice. It only took me a couple weeks to get back up and running, and like clockwork I got really busy again. So things stayed unfinished for a few more months until work slowed down for a bit.

I did a couple rounds of REW tests and acoustics tweaking, which is maddening work and I never want to hear that damn sine sweep ever again. But somehow the acoustics turned out even better the second time too, and I really just can't believe how good it sounds in there, beyond anything I could've hoped for.

And so, finally, with a studio-opening party deadline imposed on me by ms. mse, I got all the fabric and stuff done and could actually take a few crappy iphone pix: 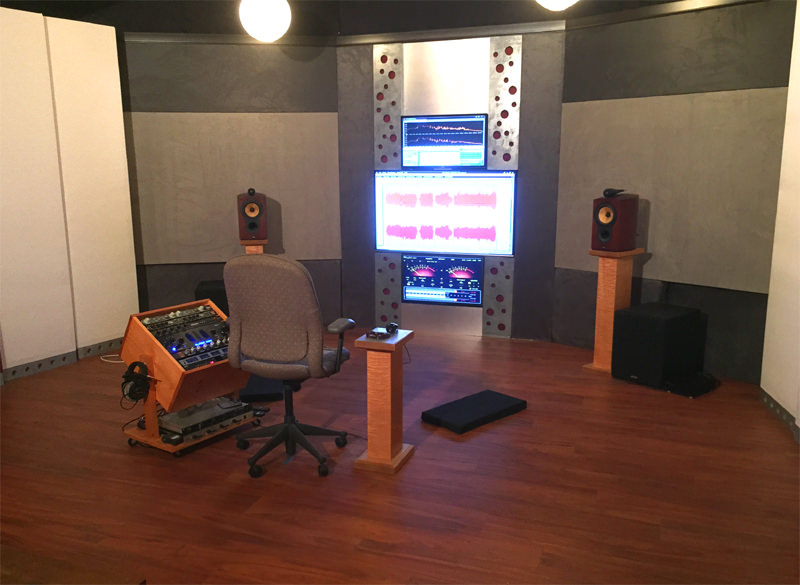 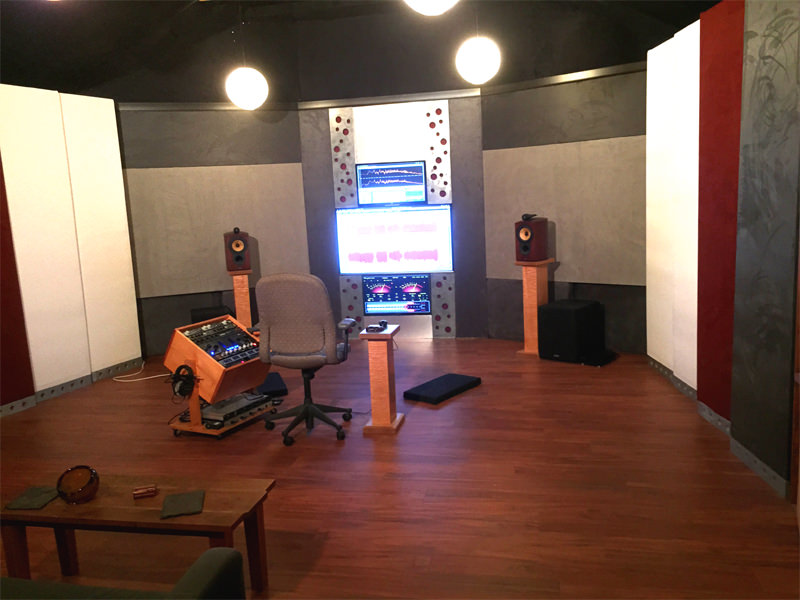 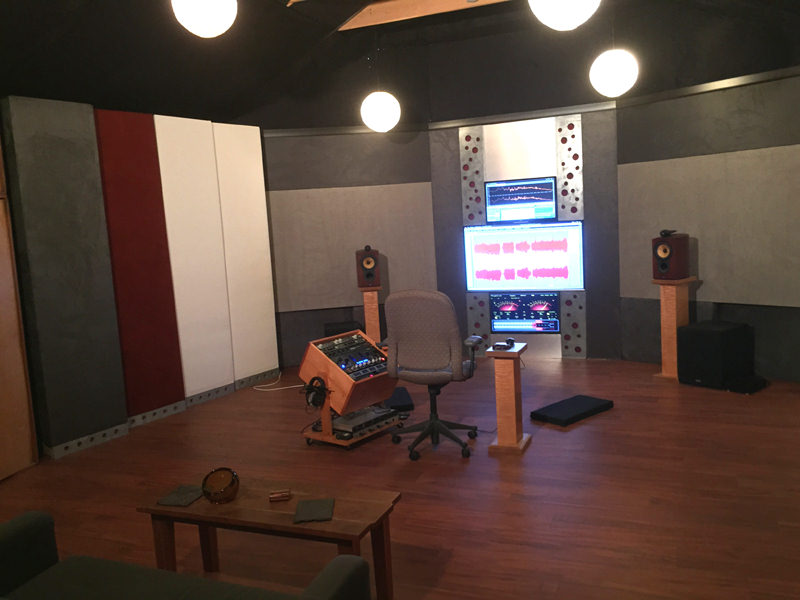 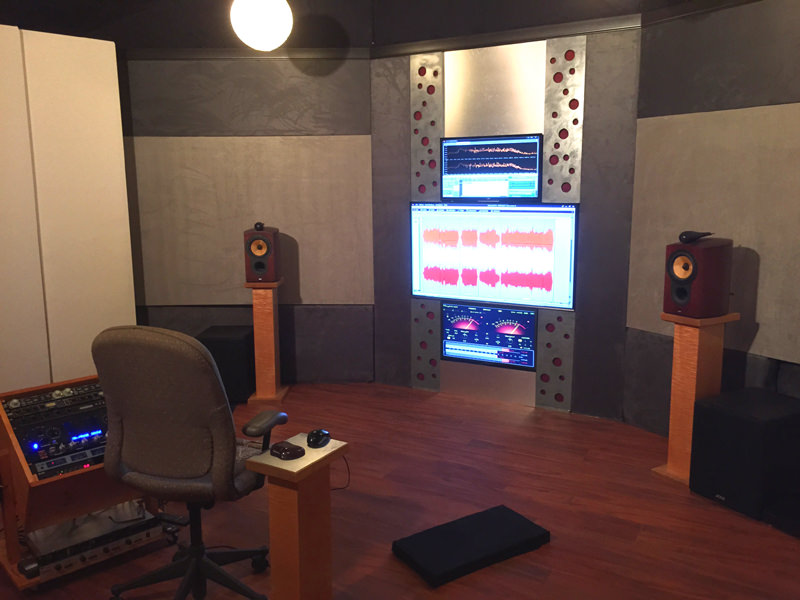 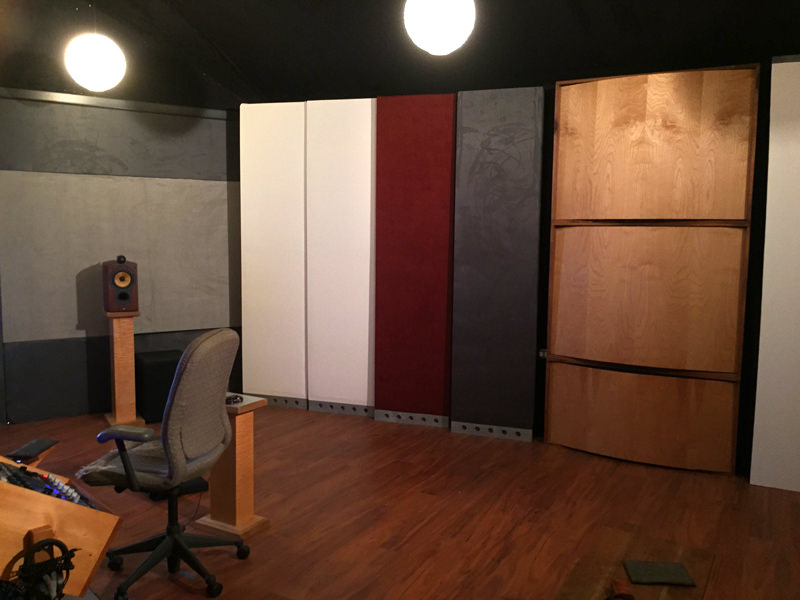 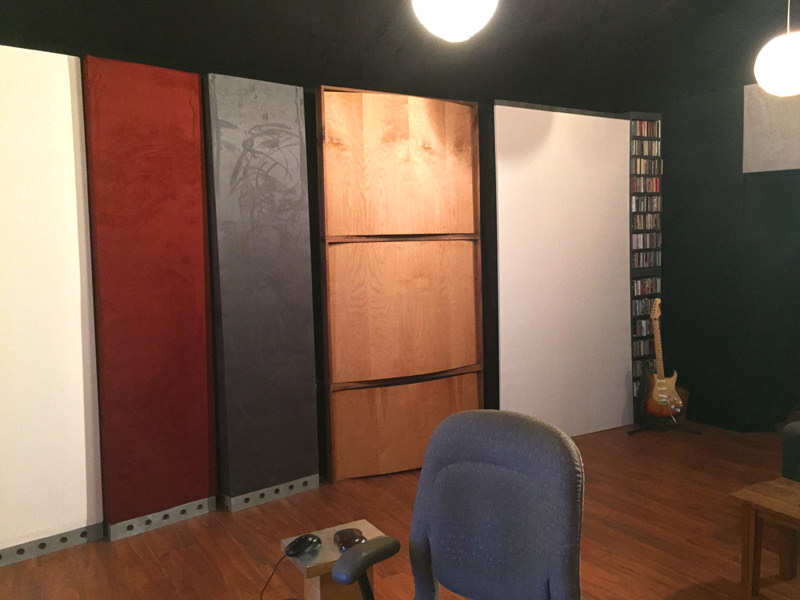 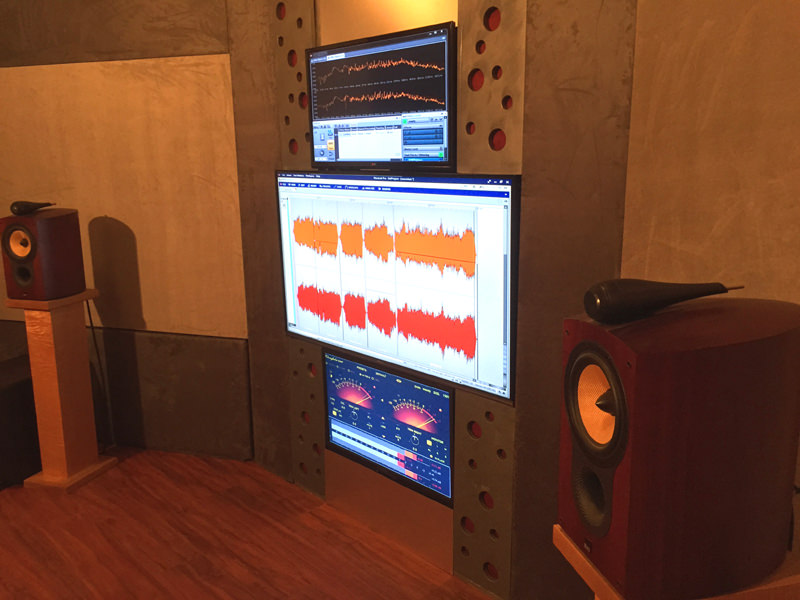 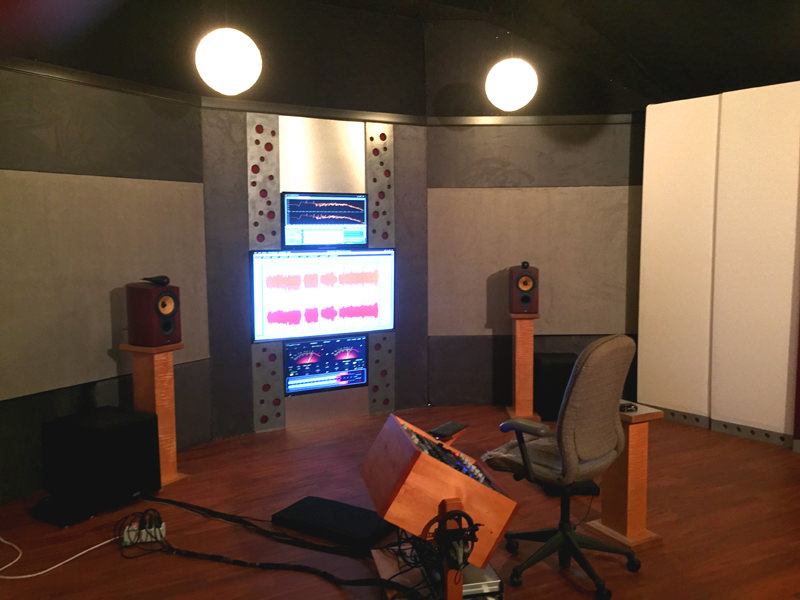 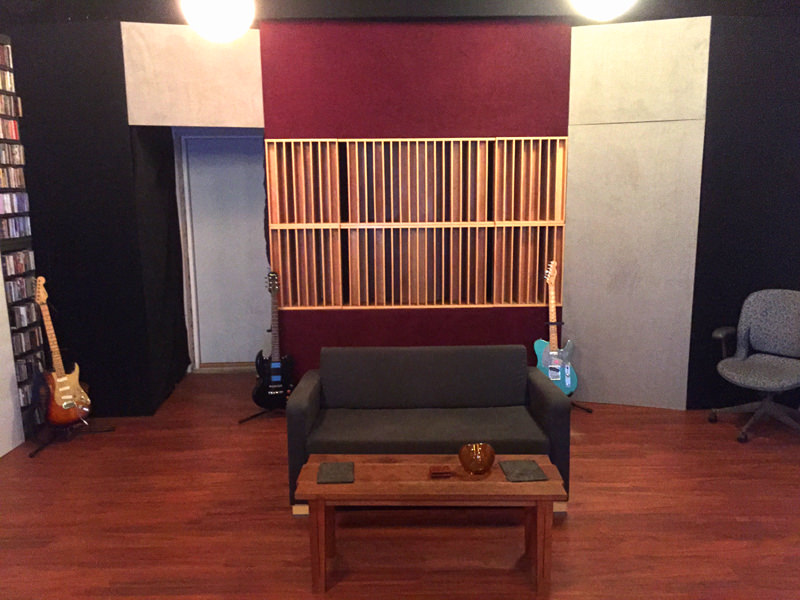 Still need to make an interior "door" for the left side in the back there (basically 703 on hinges) and there's some other small things to do, but those can wait for a time when I am less tired than I am now.

And before anyone asks, no of course you can't smoke in there, but that ashtray is just too stylish to not have on display.
www.oldcolonymastering.com
https://morespaceecho.bandcamp.com/
Top

So great! You’re making me feel bad about my flood wining a few months back.
Dave

Dang buddy. You went through the ringer.

So, was the foundation one of the main culprits?
Mo' mics mo' problems.

It looks fantastic Senior Echo. I look forward to sending you more things that you will return sounding better than when I sent them to you.
Tony
Oxide Lounge Recording
Follow me on TWITTER!
DrumsToGo.net Live drums tracks by yours truly.
MEGAN HOSACK An EP Album
SARA QUAH Taking me Back
WWRTBD?
Top

Nice! I should get around to uploading my pics and writing up my studio building experience for the collective hive mind to assimilate.

Thanks guys. I've been waiting to write that post for a loooooooong time.

No way man. Any amount of water in anyone's studio is a total nightmare. I wouldn't wish it on anyone, it's a horrible thing to have to deal with.

So, was the foundation one of the main culprits?

Hahaha, "the ringer" is aptly put. That crack in the foundation was definitely not helping things, but I think the main problem is just a high water table in the winter/spring. So I won't actually know if my ship is watertight until we get to next May or so. It's gonna be a long winter, I get anxious every time it rains. But I did pretty much everything you can do, and I think with the french drains installed correctly, the yard regraded, and the sump pit inside.....fingers crossed.

Wow, wish I could keep my place that clean! Looks great, bet it sounds even better.
Village Idiot.
Top

Haha, no one's studio is ever as clean as it is on The First Day!
www.oldcolonymastering.com
https://morespaceecho.bandcamp.com/
Top

I wonder how long it'll be before you stop worrying about flooding during heavy rains. Or are you feeling fully confident now?
Carl Keil

It's gonna take all winter, I won't know if everything's cool until we get through next spring when the water table's high.

Intellectually I feel pretty confident, because I took a bunch of steps to keep water out, and they really ought to add up to some pretty solid protection.

Emotionally though it's another story....I hate the sound of the rain now. Used to love it. Alas.
www.oldcolonymastering.com
https://morespaceecho.bandcamp.com/
Top

I hope you get back there, jojo.
Carl Keil

Users browsing this forum: No registered users and 7 guests