Not everyday listening, but I liked his tape/electronics based Legende de Eere and Electro-Acoustic Music albums, so i took a chance on this 1969 avante-classical pressing from the "new arrivals" bins today.
Stuff I've gleaned reading about it thus far: Avante Garde that bypassed the twelve tone approach of its time in favor of Xenakis' "mathematical application of suspense and release"
"three-part, microtonal melodic texture" "88 piece orchestra interspersed amongst the audience" etc.. Sounds kind of like an instrumental rendition/approach to his layered noise found sound experimental stuff, and maybe where THX got the idea for that big swooping sound it uses to introduce itself in theatres.
Not his wildest stuff, but the cover is nice..

Though the other two titles promise really adventurous music, Iron Man (recorded in 1964 but released in1968) gets you much farther than Out There (1961) or Outward Bound (1964)
Per liner notes:
"This record was produced during the early part of 1964, when Eric Dolphy and producer Alan Douglas decided to experiment with Eric's original compositions.
Two approaches were agreed upon. One was of clear simplicity; Eric on reed instruments and Richard Davis on bass. The other was more involved - a ten piece orchestra of young men who understood and admired Eric's work.
The recording sessions took place late at night in a very relaxed studio for five successive nights. In this environment the playing of Eric Dolphy, Richard Davis and the other musicians was unbelievably inspired. So much was created, individual compositions went from 'almost commercial' to 'very far out.'
Two albums were produced from that beautiful week. The first, called 'Conversations,' was released through FM Records (now available through the Roulette Record catalogue). On this (Iron Man), the second, is incorporated performances that were considered too futuristic to put out at that time."
Last edited by shedshrine on Fri May 10, 2019 11:16 pm, edited 1 time in total.

art jerry miller - rated x for mature audiences. super rare promo edition there are very few clips online so i took a punt on it, it was worth every penny and more. this is groovy stax instrumental music. wonderful arrangements and all original tunes. very pleasant surprise.
ronnie foster - sweet revival. classic blue note early 70s soul-jazz. groove city here and ronnie is very underrated on the keys.
brother jack mcduff - the natural thing. cadet records era Mac it's groovy soul jazz and instrumental soul music, the mac is ripping that organ up.
isley brothers - brother brother brother. i consider the isleys the best band at covering songs and making them their own. this is the first isleys that features the 3+3 lineup which consists of the 3 original isley brothers joined by their 2 younger brothers and cousin (chris jaspar). this lineup would crank out all the classic hits of the 70's and is so funky.
oliver sain - so good in the morning. rare press, this guy is outta st. louis and was a jazz sax guy and then found the funk, this record is like space funk meets jazz but not in a commercial way, recorded in the "lou" at oliver's studio i dig these more "down home" type recordings made in smaller studios across the country.
the staples singers - let's do it again. curtis mayfield written/produced/backing band/etc it's basically a curtis record with the staples singing lead/backing vocals. funky, soulful, and as curtis always is, something socially conscious to keep your mind running.
Top 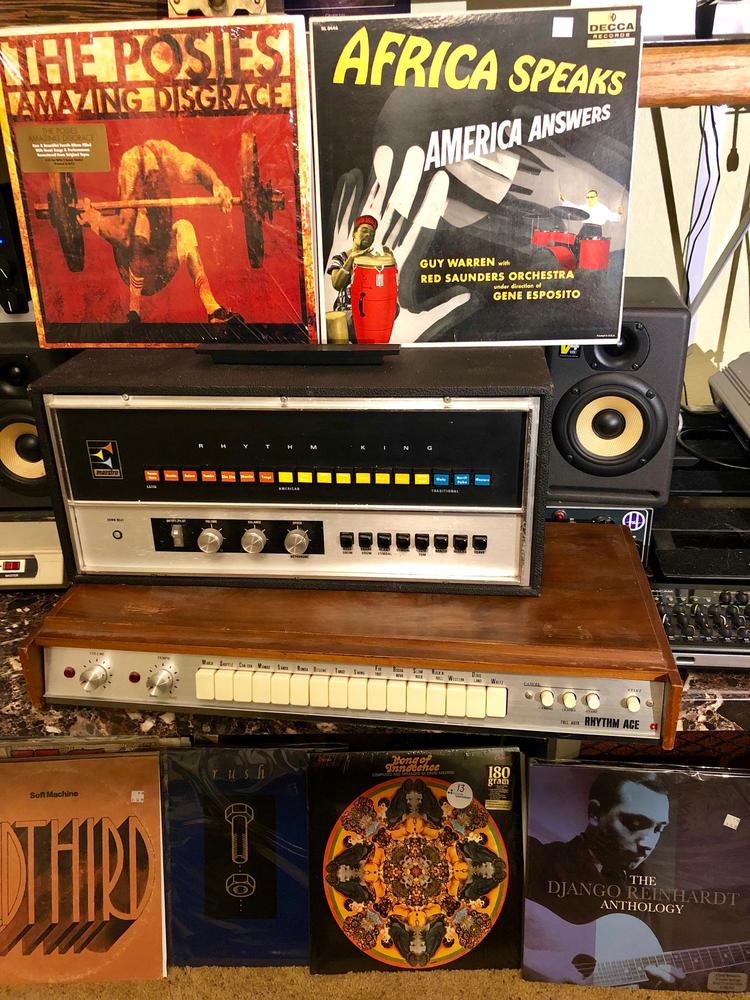 Record Store Day releases coming of his first solo album and Teenager of the Year for 2019.

i love the drum machines, the funkbox his bad self
Top

Nice storage idea rocking individual shelf lighting. Not something you can do with typical IKEA type shelves as there's no headroom. Maybe these have routed grooves for recessed lighting. hmmm. Anyway, these particular shelves belong to Rodger Coleman, one of the most laid back music/vinyl reviewers you will find.

i like the idea for the small 7" shelves. my issue is i don't have enough 7" to get a crate to house them, so they are just loose next to my receiver. i'm a big 12" guy, not much of a 7" guy. i get that "real crate diggers" are all about the 7", but i just like to get stuff to listen to.
Top

Just scored a few records at the local antique/junk shop. Nothing super exciting, but it's not too often you find jazz records for a couple bucks a piece in good shape... Ellington, Ahmad Jamal, Gillespie, Bessie Smith, Gene Ammons, and a record by a group I'd never heard of-- the Dramatics, which I got just because I liked the album cover. Plus it was on Stax. There was also a whole bunch of Count Basie records, but I didn't get them. I'm sure they'll be there for a while if I change my mind.
get a hammered sound from guitar or bass! http://www.stringhammer.com
hand-made version to raise money for manufacturing... kind of like kickstarter, but you get a fully functional item now

The Bad Plus-It's Hard: Their take on Time After Time sounds like they studied an instrumental version run through extreme time quantization creating a crazy offbeat effect. I think that's their secret. : )

I've only got a few 45's. These three are the most prized I suppose.

Not particularly valuable, but hey it's from Japan..

And just what did happen to Su Tissue anyway..

Speaking of Japan, hearing this song for the first time over a mall intercom stopped me in my tracks..

I think one of the greatest things you can hear walking into a record store is "Oh hey man, yeah, just give me a second to fill the incoming bins. Got an awesome collection in."
I didn't hear that today. Regardless..

Van Halen 1
Remastered, as in apparently Michael Anthony DID play on the album! 40 years since I first heard it and Aint Talking Bout Love is still the uber schizznit gargantuan grin riff. (Hey, Hey, Hey!!)

Third Eye Blind-Semi Charmed Life
Seems to me there was some good music out when this broke. Especially through those lenses of Nos Talgia. I remember hearing a marine corp band freaking kill the title track at Fisherman's Wharf in San Francisco on a crisp clear fall day. This copy unfortunately seems to have distortion!! I don't mind if an album isn't perfect, a little character goes a long way if the general sound is awesome, but the rizz in the foldback is bollocks mate.

More fodder for my Ornette Coleman obsession of late. Ornette! Ornette N Tenor, The Art Of The Improvisors. Haven't heard a one yet, ALLMUSIC likes 'the improvisors', guess i'll spin that one first.

Pulp Fiction Soundtrack.
It was a hot ticket, only two seats at the very front. Necks craned, that opening sequence with Miserlou was kick ass, and then the movie proper starts with that rapid fire reparte back and forth and back and forth and it never let up.
*you got to be careful if it's been awhile since you've played this, if there are tender ears about. The album tracks are interspersed with dialog from the movie. The very first track: The climactic dialogue from the Pumpkin and Honey Bunny hold up scene that is about as colorful as anything Terentino put to script, and about the time you've managed to grab the remote for the volume, there's a fierce volley of gunshots that go off ten times as loud as the dialog was. But then you get to Miserlou and all is forgiven.

J Dilla-Donuts-
What do you call albums like endtroducing by DJ Shadow and Donuts by J DIlla?
(just looked it up: Electronic, Hip Hop Instrumental, Downtempo, Cut-up/DJ, Trip Hop )
Skilled edits and manipulations of old soul records etc. into eery poignant layered loops of a nostalgic trip through a musical rain forest. I don't know much about J Dilla beyond reading about his tragic backstory. But layed up in a hospital making and layering loops from your music library for a year or so while contemplating your demise and wanting to leave something for your little brother...would definitely raise the possibility of yielding some interesting results and it certainly does here.

nice catch on jimmy mcgriff, i got a bunch of his stuff, funky indeed!
Top