I looked around GS, but the arguments are already way too specific and I cant find a more general thread...

I'm *thinking* about upgrading my studio computer. While my old ass quad core cheese grater tower is FINE, it can get sluggish and I'm afraid that it doesn't have that many years/months left. I'm moving spaces soon and I also just upgraded my laptop to a new macbook pro, so maybe this is the time to upgrade all around.

The Mac Mini is appealing because 1)its cheap(er) 2)I've already got a glut of useable large monitors 3)its probably already a good deal more powerful and efficient that what I'm already using. If this was the direction, I could probably afford to do it now.

But... I don't want to cut myself short just to save a few bucks. Do it need a mac pro or iMac? I don't do gigantic track counts with hundreds of plugins but I do want to have flexibility, and I need to be able to sync video and audio. I'd probably have to hold off and save up if I went this route.

What are people using/buying today? What are the bugs that haven't been worked out yet?
Geoff Mann
composer | drummer | Los Angeles, CA
Top

My experiences running PT on a mac mini have been pretty awful, BUT, the one I was trying it on was an older model so I'm guessing the specs have improved rather dramatically between then and now.

I've been using a Macbook pro for the past couple years, because I need the mobility and it's been [mostly] great. I have had issues with CPU spikes and PT quitting unexpectedly, but I seriously doubt that that has anything to do with the laptop. Seems more like Avid sucking ball to me. I typically run sessions with a relatively high track count (not like 120 tracks or anything that crazy like that), UAD, Soundtoys and native plugins, etc.... If I look at CPU usage I'm typically topping out around 30%, so that indicates to me that the processing power I have is more than sufficient.
Ryan Slowey
Albany, NY

It all hinges on the DAW you are using.

I have a friend who uses the trashcan mac with Logic Pro. If that is your route, I can get you in touch with him, so he can give you
tips etc. Otherwise I highly recommend a Mac laptop. Just not the really new ones, and they do not have the connectors you would need. I might be getting a new one this year, and experimenting with their idiotic USC C / Thunderfart adapters. But I am not hopeful it will work ok. The older Mac laptops with tons of interfaces on the side is where it's at.

I have been very happy with my second ProTools machine, a laptop now running Pro Tools 2018.5 :

Using as interface a Focusrite RedNet 2, a 16 channel IO with Dante. Dante ROCKS. It is audio over IP, meaning ethernet cable. Super low latency, and amazing routing possibilities. I can even hook up both my DAWs, at the same time, and share the one interface, or route audio directly from on to the other digitally. It really is amazing technology.
Howling at the neighbors. Hoping they have more mic cables.
Top

But of course, no thunderbolt. Which hasn’t been a problem for me. And who knows how long Apple will keep the life support on as far as MacOS goes.

If I had to replace the system today, and had to stay Mac, I would probably just see what kind of reasonably spec’d second hand system I could find...whether that be a mini or iMac...or another cheese grater.

Honestly I have a 2011 quad core i7 MacBook Pro that can handle most of the work I do...though film work would be a problem. So I think most of the systems with a modern processor would be pretty up to the task.
Top

Last year we were in a similar situation and ended up going with a custom iMac rather than the iMac Pro.

We put a lot of RAM in it and we got a 2 space Thunderbolt 3 Sonnet PCIe card chassis for our Pro Tools card and the UAD card.

It's been working great for us. 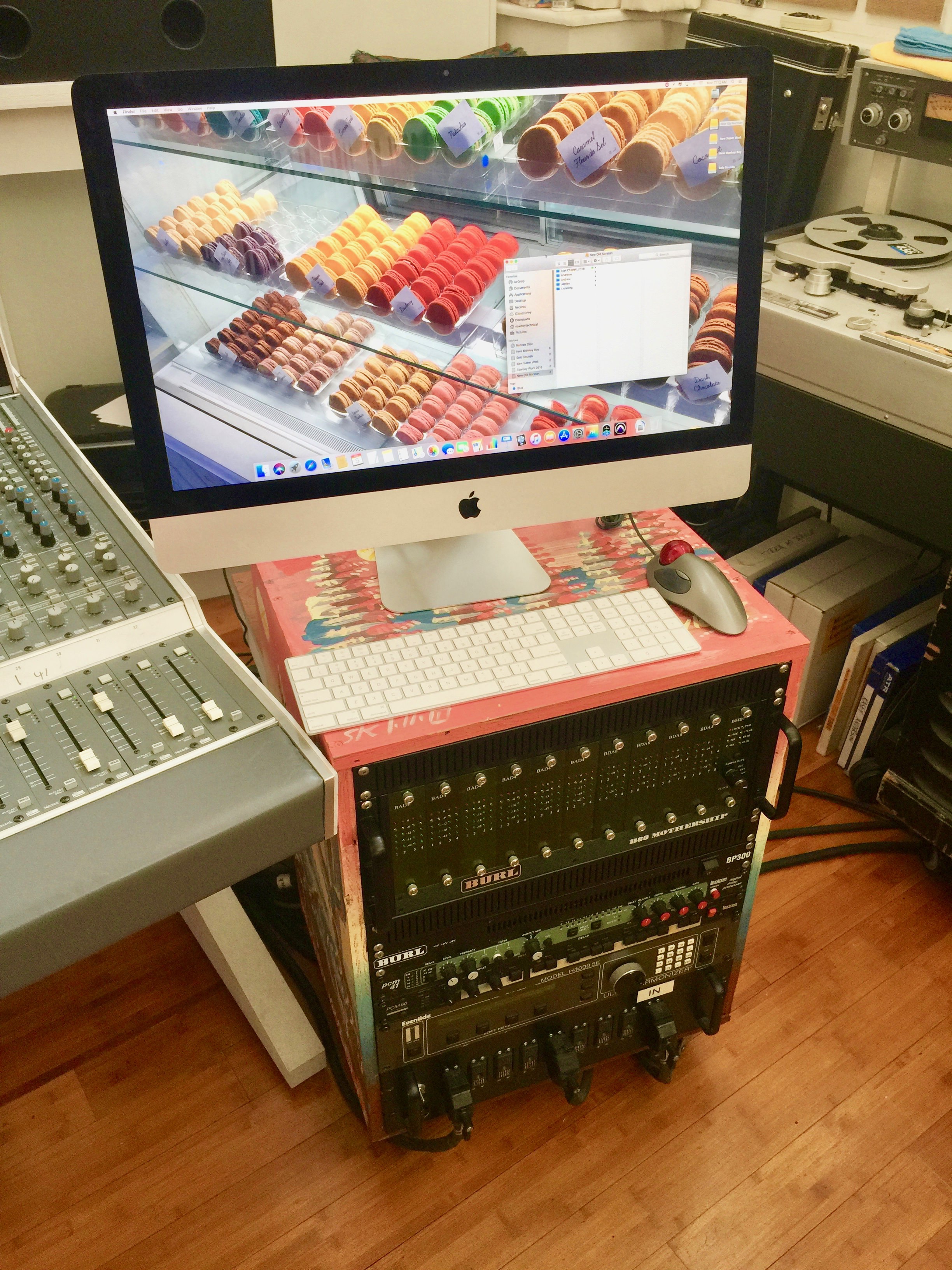 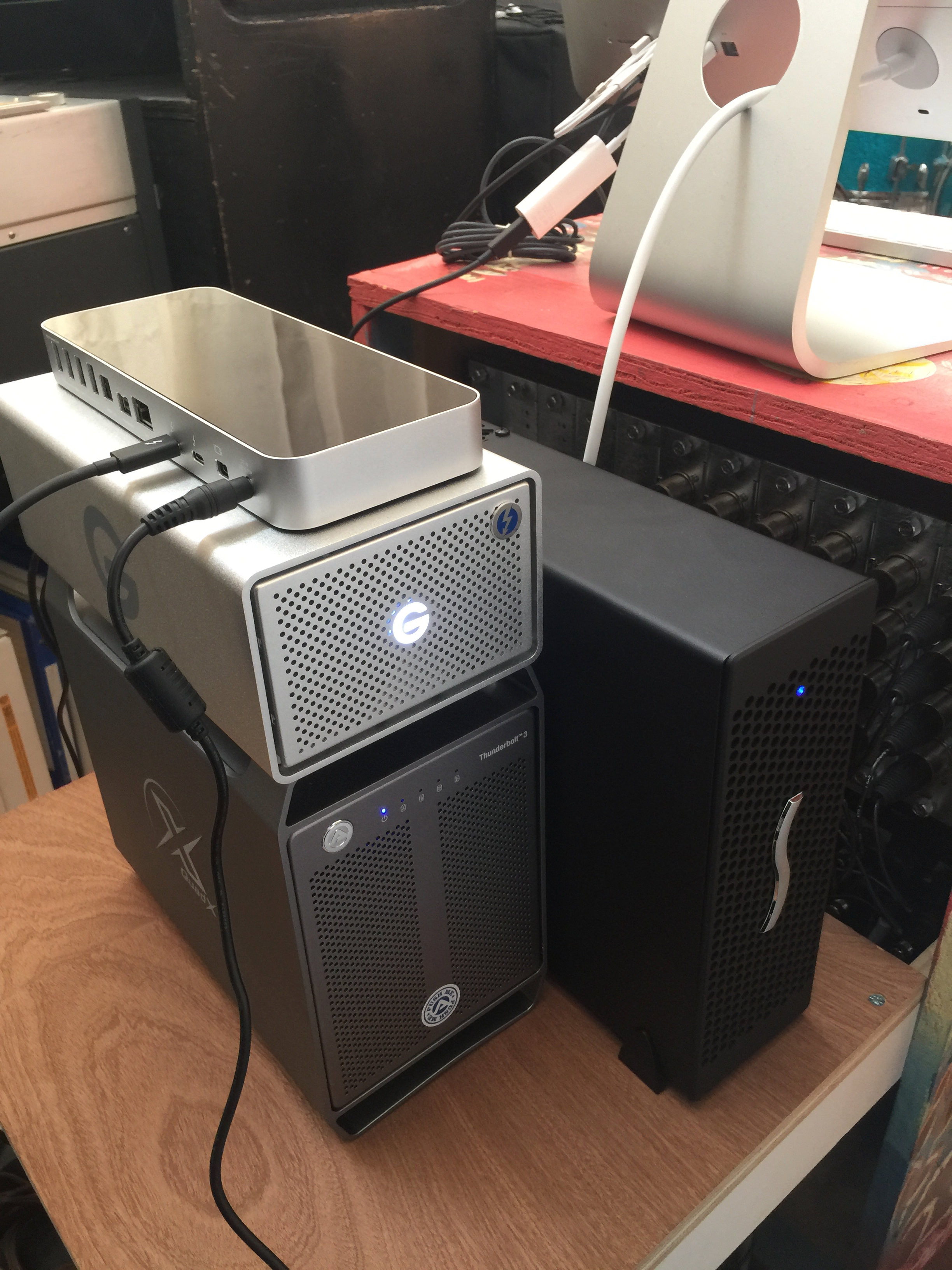 
That's interesting. I didnt know about those sonnet chassis things. Maybe a good first step would be to get one of those so I can use my monitors and RME Multiface with my new laptop. I dont think the laptop could be the long term solution (i really prefer having a main recording computer that stays in one place), but it could be an entry into an upgraded world.
Geoff Mann
composer | drummer | Los Angeles, CA
Top

Yeah, I'm running logic so dont need to worry about any PT stuff.

I did just buy a new laptop in the fall and got logic x on it which seems to be working fine, though I haven't done any heavy projects on it yet. Actually using a zoom h6 as an interface for it and it's working very nicely.

I'm going to try it out at the new space for a bit i think but I really would like to have a machine that doesnt move to be where I do most of my recording.

I also have some large orchestral sample libraries so that may direct my needs a little bit.

Does anyone know of any specific downsides to the new Mac Mini?

It looks like I can max out the ram at 64GB and get a 6-core i7 processor for still less $$ than an iMac with half that ram, and WAYYY less than a mac pro trashcan of similar abilities. If this sonnet thing works out that could solve my monitor and interface connectivity issues (I think) and I'm pretty sure my External Hard Drive enclosures already are thunderbolt 3 compatible.
Geoff Mann
composer | drummer | Los Angeles, CA
Top

Everything is real good up here!!! Thanks!!!

As to your sample libraries, I would get a external drive tower and call it a day.

My Mac tower died (both system drives LOL), so it is a pain in the arse to have those things inside the computer.

Moving all that out of there enables me to use it with any computer at all.

Do check out the Focusrite Dante interfaces, they are amazing.

Cheers!!!
Howling at the neighbors. Hoping they have more mic cables.
Top

Mitch Easter has been using Minis in two of his three rooms for years. The main computer at The Fidelitorium is a mini that he got two years ago.

I ran an 8-core cheese grater from 2009 until ~2017... at that point, my late 2013 Retina 15" MacBook Pro was actually performing faster than the tower for soft-synths & native plug-ins, so I dumped my UAD PCI-E cards and went to thunderbolt Satellites.

For a desire to record in obnoxiously high sample rates for rock sessions (make fun of me, in your head, all you want, but don't derail original poster's thread), I decided to move to a used 2013 Trashcan Mac. With the prospect of a new Mac tower looming on the horizon, I started ferociously scouring eBay for 12-core 2013 towers... I finally found one, decked-out... and got it for a decent enough price... It's 5yrs old, but I think I can get 5 more years of tracking out of it.

Compared to my quad i7 retina laptop, it's pushing 2-3x more native plug-ins on the sessions... and the throughput on the bus has allowed me to bring my session buffers down even lower, and the new machine isn't breaking a sweat.

For all of the heat that Apple got over these black cylinders, I'm actually really really impressed with its performance. No joke. If you end up shopping for a used one of theses, there's really only one thing to beware of: read this 2013 Mac Pro video issues article to learn more about it... but long-story-short... ask the seller to run "coconut battery.app" on the machine to get the exact build-date, and avoid machines that were built inside the narrow faulty-video-card window.
ADSR | twitter | linkedin | Instagram | my band | BandCamp
Top